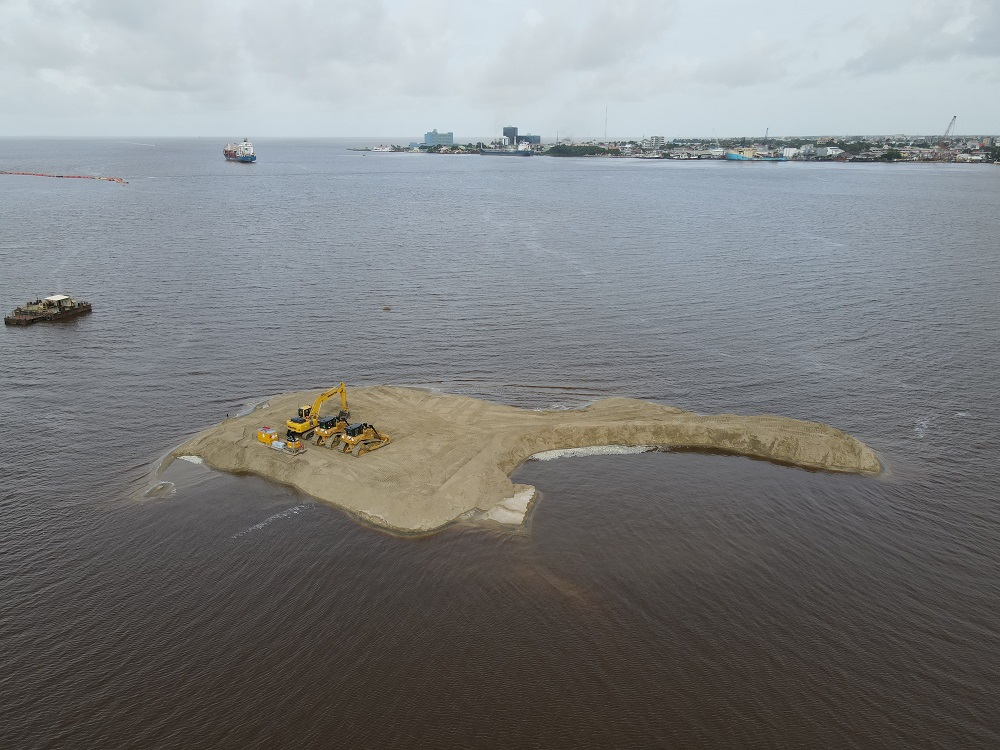 Guyana’s first artificial island being created in the Demerara River is out-of-bounds as more dredged material is being added to the still unstable area, the Vreed-en-Hoop Shore Base Inc (VESHI) said on Tuesday

“The project managers have warned that the site remains an active construction zone and landing on the island is prohibited. The island structure, while visible, is not yet a fully stable formation. The team is therefore urging all to remain clear of the construction zone and to adhere to the previously issued notices,” the company said in a statement.

VESHI said the new island is part of the reclaimed land that will be transformed into the estimated 44 acre mega-project to create the shorebase facility which will form part of the Port of Vreed-en-Hoop.

The company says during the current sandkey reclamation phase, the dredger, M.V Galileo Galilei, will continue the process of adding reclaimed material for the creation of the artificial island on which the construction of the new terminal will be situated.

VERSHI says this project will, in the first phase, add more than 44 acres to Guyana’s coastline. The company explains that phase one of the project is meant to be the special purpose  vehicle to serve as a SURF (Subsea Umbilicals, Riser and Flowlines) Shorebase for Esso Exploration and Production Guyana Limited (EEPGL) projects.

The project started the first step in June, which entailed the dredging of the access channel in the Demerara River including the deepening/widening of the existing nautical channel, berth pockets, and turning basin.

VESHI says this phase has been hailed a success by the project managers and the upgraded channel has been handed over to the Maritime Administration Department (MARAD).

VESHI is currently the largest Guyanese private sector investment in the oil and gas sector and is
expected to cost over US$300 million.

According to the project directors, the support and encouragement given by the Government of Guyana have been reassuring and augur well for additional investment and the future of Guyana. The project is expected to become operational in 2023.

VESHI is a joint venture between NRG Holdings Inc.—a 100 percent Guyanese- owned consortium that is the majority shareholder –and Jan De Nul, an international maritime infrastructure company headquartered in Luxembourg.