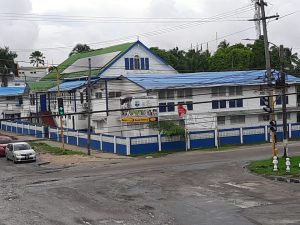 The 15-year old Christ Church Secondary School student, who was rescued by a football coach from further beating by schoolmates, has been discharged from hospital, even as investigators prepare to charge the two alleged perpetrators, officials said Monday.

A Georgetown Public Hospital official said the lad last week underwent successful maxillo-facial surgeries and was discharged from that section of the hospital.

However, neurosurgeons opted to keep him in for further observation due to head injuries he received at the hands 0f two other 15-year old boys.

He was discharged from the hospital and is now at home recovering.

The football coach, Troy Wright,  recalled shouting at the assailants to stop kicking and cuffing the already bloodied and unconscious boy on the Burnham Basketball Court on December 7, 2022 at about 2:50 PM.

Police said the two 15-year old suspects have since been questioned by investigators. Police said due to their ages, the Guyana Police Force were required to apply and obtain a pre-charge report from the Child Care and Protection Agency of the Ministry of Human Services and Social Security. “Investigators intend to recommend charges against the two suspects,” a high-ranking police officer told Demerara Waves Online News.

According to Mr Wright, the child was chased from school and beaten into an unconscious state until he managed to run and shout at the group of children. He recalled holding on to one of the suspected assailants and calling police and ambulance at the same time.

The other students, he said, fled the scene.