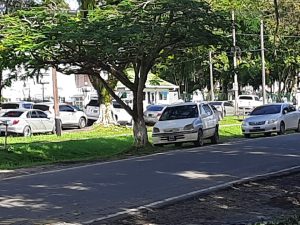 A man, who demanded to see President Irfaan Ali, stabbed a policeman several times to his neck, grabbed a lawman’s pistol and opened fire several times, was shot and injured.

No one has been reported killed.

The suspect and the policeman are hospitalised in a stable condition.

Carmichael Street and New Narket Streets near State House were cordoned off. Traffic is flowing freely on Main Street.

The incident occurred at State House (southern guard hut) on Carmichael Street at about 07:30 hrs this morning (Thursday 15th December, 2022).

Police said investigations revealed that on the date and time mentioned, a security detail was on duty at south eastern guard hut adjacent to Carmichael Street when a male  confronted the security stating: “I want the President”.

The said male then drew a knife from his pants waist and stabbed a policeman five times to his neck and other parts of his body.

Police said another policeman, who was part of the security detail, was relieved of his firearm by the suspect.

A 9MM pistol and seven 9MM spent shells were retrieved.

“Both the suspect and the Police rank were rushed to the GPHC for medical attention.Their conditions are stated as serious. Investigations are on going,” police said.