BREAKING: Guyana asks INTERPOL for help on background of Nigerian in shooting, stabbing at State House 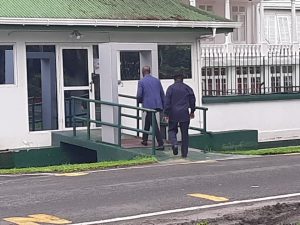 The State House guardroom where the incident occurred.

The Guyana Police Force on Thursday said a request has been dispatched to the International Criminal Police Organisation (INTERPOL) for more information on the Nigerian man, who staged a daring knife and gun attack on presidential guards at State House that resulted in him being shot and injured.

Police identified the man as 35-year old Bethel Ikenna Chimezie and said he was employed at a cleaning service. “The GPF has requested  via INTERPOL a comprehensive background check on him; also whether he has any criminal history or whether he is linked to any criminal group,” a senior police officer told Demerara Waves Online News.

Chimezie was up t0 Thursday afternoon undergoing a series of surgeries for gunshot injures to his his head, torso and leg that were inflicted when presidential guards opened fire on him.

Earlier Thursday, police said that at about 7:30 AM , the man entered State House’s south-eastern guard room and demanded to see the President. He allegedly whipped out a knife and stabbed a policeman several times to his neck and other areas of his body.

Police said Chimezie then snatched a pistol from a presidential guard, ran out of the guard room on to Carmichael Street and fired several shots. Police said a 9MM pistol and seven 9MM spent shells were retrieved.

He and the policeman were rushed to the Georgetown Public Hospital in a critical condition.