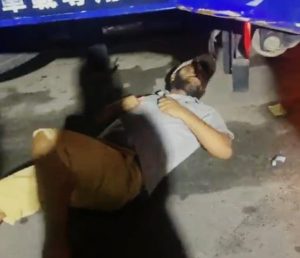 City Mayor Ubraj Narine lays next to a truck.

Despite the presence of several unarmed police, the vendors blocked the workers from taking away the more than 15 caravans and stalls. Mr Narine laid on the road to prevent vehicles from leaving the block between Thomas and East Streets. “They had to put them back. I didn’t allow it. I threw myself across the truck to represent the poorer class of people in this country,” he said.

Mr Edghill, however, said he was unaware that the operation was halted and that government remained determined to remove the structures because they were contributing to traffic congestion and delays as much as seven to 16 minutes in emergency patients being transported from Thomas Street to the Georgetown Public Hospital gate.

Monday night’s efforts to remove the structures came after the expiration of a final notice on Monday at the end of seven days.

The City Mayor said none of the laws gives the Central Government authority over vending. “There is no way in the law stating that. The (relevant law) gives the power to the Council and it is sad to see that they are going about single-handedly in dealing with these matters when you have an elected Council,” he said.

Mr Narine stressed that he remained ready to consult with the Central Government to relocate the vendors to a suitable location.

The Public Works Minister said if the Mayor wants to continue with his approach , “we would have a rogue City” .  He brushed off concerns by the vendors that if they are removed they would be unable to earn, Mr Edghill said anyone who has to remove would make that claim “to find a good soundbite for the public.”

Mr Edghill said the vendors could move to other areas if they want to abide by the law rather than engage in “presumptuousness” and led on by an irresponsible and irrational Mayor. “He is only practicing narrow politics,” the Minister said.