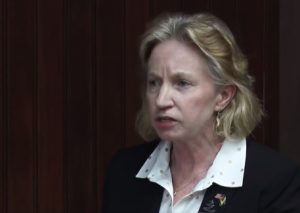 United States Ambassador to Guyana Sarah-Ann Lynch on Tuesday welcomed the Guyana government’s increase in salaries, in particular public sector healthcare workers, in an effort to retain them in country.

“We know that very well that Guyanese are smart, capable professionals who need to be paid fairly for their work and steps like the one you took yesterday, earlier this week, are key to recognising and retaining key critical talent in Guyana to aid with this rapid economic transformation,” she said.

President Irfaan Ali on Monday announced a GY$1.5 billion annual recurrent expenditure on salary increases for 5,000 healthcare workers as they would from January 1, 2023 earning a minimum of GY$100,000 (nurse aides) and a maximum of GY$450,000 (specialists).

The United Kingdom continues to be a major destination for Caribbean nurses, prompting suggestions that countries like Guyana could actually train that category of healthcare workers for the British market.

Except for dentists and prison service personnel, there have been specific increases for certain categories of health sector workers and disciplined services members.

No specific increases have been announced for teachers who continue to leave their jobs in Guyana and the rest of the Caribbean for comparatively higher paying openings mainly in the United States.  The Guyana Teachers Union, in an apparent reaction to the pay hike for healthcare workers, stated on its Facebook page that, “teachers are the backbone of our society. Let’s treat them that way.”

GTU President Mark Lyte said “While the teachers of Guyana have moulded other professions, we are not treated like every other person,” he told a limited press briefing.

Teachers’ promotions have not been held over the past two years as there is no Teaching Service Commission (TSC).  Mr Lyte said in the absence of the Commission, the Ministry of Education has been hiring teachers directly. “While the teachers of Guyana have moulded other professions, we are not treated like every other person,” he added.