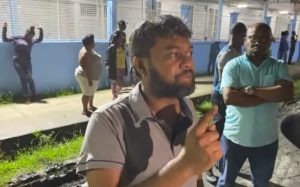 A large section of the Muslim community and the Private Sector Commission (PSC) on Tuesday condemned Georgetown Mayor Ubraj Narine for seeming religiously and racially divisive remarks Tuesday night on Tuesday night while police and Public Works Ministry workers were attempting to remove food caravans from New Market Street opposite the Georgetown Hospital.

Mr Narine questioned whether the President was refusing to work with him because he is a Hindu and he is a Muslim. “This thing will go down dangerous for our country Mr President. Is this State going to become a Muslim State?…And the Muslim organisations should make a statement about this kind of dictatorship by the President and his team,” said Mr Narine who is a Pandit. The Mayor queried whether the Afro-Guyanese vendors on New Market were  being “bulldozed like dogs and animals” while meeting with speedboat operators and farmers because they are Indo-Guyanese.

In a joint statement, the Central Islamic Organisation of Guyana (CIOG), Muslim Youth Organisation (MYO), Darul Uloom Madrasah Arabia Islamia, Guyana Islamic Trust and the Guyana United Sad’r Islamic Anjuman bluntly rubbished the Mayor’s claim that the President was establishing an Islamic State. “Further, His Excellency has never claimed that he is a President for Muslims alone, nor that he has a Muslim government and is working to establish an Islamic state, nor can any of his actions be interpreted in that light. Rather, his engagements with
all religious groups show the exact opposite.

Those organisations accused the Mayor of contributing to the incitement of fear of Islam by his irresponsible statements.  “Such outbursts are foolhardy and very dangerous, and feed into the Islamophobic agenda which seeks to incite fear in the hearts of people regarding Islam and Muslims, and they must be condemned in the strongest terms,” those organisations said.

Those Muslim organisations said Mayor Narine’s statements amounted to a pathetic political stunt to incite the emotions of people and garner support for himself.

They defended President Ali, saying that while he is a Muslim , it is that religion that teaches him to serve all Guyanese and the proof of this are his engagements with the various religious groups and it is clear that no single religious denomination can claim to be less favored by him.

Home Affairs Minister Robeson Benn called on the Mayor to resign or be removed from office and said police have been called in to investigate the Mayor’s remarks. “The Police have been requested to review the antics and utterances of the Mayor for breaches of the peace and the law. It is my view that the actions and words of the Mayor go a long way in explaining the deplorable state of the city of Georgetown, it’s critical public spaces and even the condition of City Hall and the services provided to citizens and visitors,” Mr Benn said.

The PSC said the Mayor sought to apologise for his statements after an outcry from the Christian, Muslim and Hindu organisations. That business organisation said he must leave office. “The Private Sector is of the view that, given the high office and responsibility of the Mayorship of our capital city, Mr. Ubraj Narine has proved himself to be unfit for this office and is left with no alternative but to immediately resign.”

Opposition Leader Aubrey Norton’s office has since labelled the PSC, which has called for Mr Narine’s removal from office, a “stooge” and charged that business organisation was provided the statement by its handlers in the governing People’s Progressive Party (PPP). “The PSC has once again failed its obligation to represent the interest of businesses whether large or small, or whether on the pavements or in buildings. It has become a political stooge, and Guyanese are correct in ignoring its public utterances,” Mr Norton’s office said.

The Public Works Ministry on Tuesday reiterated that the vendors’ stalls and food caravans would be moved from New Market Street because they are impeding “free flow of access” to the Georgetown Public Hospital. Public Works Minister Juan Edghill urged the Mayor and former Public Infrastructure Minister David Patterson to explain to Guyanese why New Market Street should be left congested and encumbered.