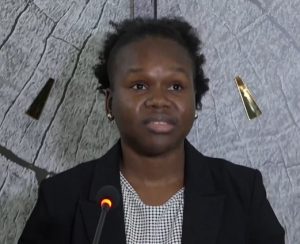 Agents of the Guyana Police Force’s Special Organised Crime Unit (SOCU) are allegedly avoiding service of  private criminal charges instituted by a lawyer who was prevented from leaving the offices because she informed her client to remain silent, her lawyer Nigel Hughes said.

With the Director of Public Prosecutions, Shalimar Hack and the Police Commissioner Clifton Hicken both failing to respond, according to Mr Hughes, the offended lawyer, Tamieka Clarke, is now expected to seek a High Court order to compel Mr Hicken to accept service of the charges on behalf of the SOCU agents, Superintendent  Krishnadat Ramana, Sergeant Navranda Persaud and Sergeant Winston Singh.

“Move to the Court to have the Commissioner of Police accept service on their behalf,” was Mr Hughes’ response to what else would be done to have them served and appear in court.  Mr Hughes said further court action would be taken because after four attempts to effect service on the Officers of SOCU, the bailiff has since informed Ms Clarke’s Attorneys that  no further attempt at service will be undertaken.

Mr Hughes said that on December 9, 2022 Superintendent Ramana and Sergeant Persaud were “observed in the SOCU office when service was attempted for the fourth time by the bailiff of the Georgetown Magistrate’s Court. The bailiff was informed that the officers were out in the field.”

Mr Hughes said Ms Clarke received no response from the Director of Public Prosecutions about the status of the investigations, and the Police Commissioner has not acknowledged receipt of a letter dated December 7 by Ms Clarke’s attorneys informing him of the alleged evasion of service of the private criminal charges.

Lawyers for Ms Clarke told the Police Commissioner that “it appears from the circumstances of each failed attempt that the officers are evading service” and they asked him to “take any necessary action in order to assist us in serving the private criminal charges on the said officers.” Copies of the charges accompanied the letter to the Police Commissioner.

Particulars of the charge are that on October 28, 2022 at SOCU headquarters Attorney-at-Law Clarke was unlawfully obstructed so as to prevent her from proceeding out of SOCU in which she had a right to proceed.