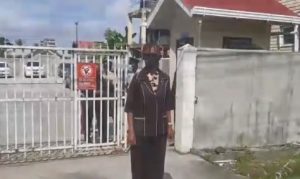 Opposition A Partnership for National Unity+Alliance For Change (APNU+AFC) Chief Scrutineer , Carol Smith-Joseph was read 14 fraud charges connected to when she had served as a Director of the Mahaica Abary Rice Development Scheme (MARDS) back in 2016, Attorney-at-Law Roysdale Forde said.

“There is no clear explanation from the police as to what is the subject matter and what it relates to really; they are just saying that she received funds being the property of MARAD,” he told Demerara Waves Online News.

Ms Smith-Joseph allegedly committed the offences in May 2016. “The present administration has been in office since 2020 and no attempt was made to lay these allegations until after Ms Joseph commenced proceedings against GECOM,”  Attorney-at-Law Nigel Hughes said.

Mr Hughes said the accused declined to give a statement on the advice of Counsel.

She was released on self-bail and ordered to return to court on December 16.

Ms Smith-Joseph was earlier this week ordered to report to the Guyana Police Force’s Special Organised Crime Unit (SOCU). Attorney-at-Law Nigel Hughes said after they emerged that she was told that she was under arrest.

While she and her lawyers were inside, opposition supporters chanted and waved placards outside SOCU on Camp Street, Georgetown. The APNU+AFC has linked the police action against Ms Smith-Joseph to her recent High Court challenge against the Guyana Elections Commission (GECOM) going ahead with Local Government Elections without sanitising the voters lists based on residency and existence as well as the Local Government Minister Nigel Dharamlall’s reconfiguration of a number of constituency boundaries.

Mr Forde, who is the opposition’s Shadow Attorney General, contended that “we believe that it is a retaliatory act because the circumstances obviously would have been known to them for many years but they only instituted after the proceedings would have been filed and it led to  catastrophe at GECOM.”

GECOM on Thursday decided abort Nominations Day that was scheduled for December 12, and is now expected to make arrangements to go ahead with a proposal by the Chief Elections Officer Vishnu Persaud for the voters lists in each constituency to be corrected.