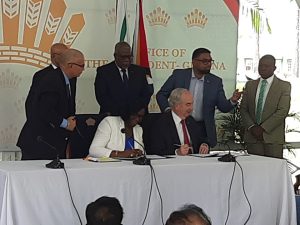 Hess C0rporation, one of the co-venturers in the prolific Stabroek Block, on Friday inked deal with government to buy US$750 million in carbon credits from Guyana, which would see Indigenous Indian communities getting a portion of the funds, officials said.

Vice President Bharrat Jagdeo announced that from US$28 million of the US$187 million legacy credit for 2016-2020 which Hess has bought at a minimum of US$15 per tonne would be given to the Amerindian communities whether or not they live in forested areas of Guyana.  “We made a commitment that 15 percent of all of the proceeds from any sale of forest carbon will go to Amerindian communities,” he said.  He said the communities would benefit equally and they would decide on the distribution, based on talks with the National Toshaos Council.  Mr Jagdeo added that from the sale of credit from 2021 to 2025 would be at US$20 dollars per tonne which would yield another UDS$250 million and US$312 at a rate of US$25 from 2025 to 2030.

“The Amerindian communities, from this deal alone with Mr Hess, would benefit from  about US$112 million. That’s a lot of money,” he said,  even as he recalled challenging  non-governmental to craft a proposal that would yield US$112 million for Indigenous Indians.

He later told reporters that an international account would be set up f0r the funds to be deposited, would be audited by the Auditor General and Parliament would be notified.

The Vice President, who is the point-person on climate financing, expects that Guyana would earn more based on this sale of 30 percent or 33.5  million carbon credits. “This will be at a minimum because we anticipate now that the market will move and this is something that is crucial for us,” he said.

President Irfaan Ali said Guyana’s 18 million hectares or 89 percent of the forest is intact and stores 19.5 gigatons of carbon with an assessed value of $40 billion to $50 billion annually.

With this jurisdictional sale of carbon credit that came one day after the Architecture REDD+ Environmental Excellence Standard 2.0 (ART-TREES) secretariat issued the “world’s first jurisdiction scale market-ready” carbon credit to Guyana,   Mr Jagdeo said Guyana now expected increased sale and demand for carbon credits at higher prices. “Even now with this major deal, we hope that the voluntary market, that the prices will go up on the voluntary market, because the prices were hovering at some abysmally low levels and this one major deal will have global resonance and it will make a global shift,” he said.

With 70 percent more carbon credits yet to be sold, the Vice President said Guyana hoped to get “good prices” and would await market movements.

Mr Jagdeo hailed Hess Corporation, which is a shareholder in the Exxon-Mobil-controlled Esso Exploration and Production Guyana Limited (EEPGL), for inking the deal, saying that it makes Hess “one of the top funders of forest action in the entire world and we believe the top private sector funder of climate action and forest anywhere in the world.”

Chief Executive Officer of Hess, John Hess said the agreement would help Guyana protect its “vast forest, one of the largest carbon sinks in the world” and provide money for the government to invest in improving the lives of Guyanese. Mr Hess noted that the forests are trapping almost 20 gigatons of carbon dioxide than Guyana emits. “It’s one of the few countries in the world that can do this,” he added.

He said Guyana must be credited with providing the world with a model to the rest of the world for stopping deforestation and preserving forests. Avoiding global deforestation by 2030 was one of the key pledges that more than 130 countries, including Guyana, at the Conference of the Parties, he said.

Mr Hess said the Guyana-Hess Corporation forest carbon credit agreement adds to his company’s growing successful emissions reductions efforts and is an “important part of our commitment to achieve net zero” by 2050. “Many companies make pledges about next zero. We actually are showing action. The country of Guyana is showing action and steps to make 2050 net zero a reality,” he said.