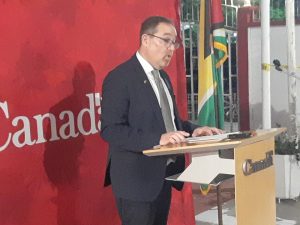 Canada has received a request from Guyana to lift tourist visa requirements for Guyanese, even as vigorous efforts are being made to have a Canadian airline provide direct flights to this oil-rich South American nation, Canada’s High Commissioner to Guyana Mark Berman said Monday.

“The Government of Guyana has indicated their interest in having that discussion and we have advised Ottawa,” he told reporters. Ottawa is Canada’s political and administrative capital.

He noted that Guyana is among 100 countries for which Canada has visa requirements. “It’s something we’re looking at and will make a determination,” he said.

The Canadian envoy, meanwhile, said intense efforts were underway to convince Air Canada or West Jet to make a business decision to serve the Guyana-Canada route and take advantage of the large Guyanese diaspora and increased business travel. “There are more Canadian businessmen coming to and Guyanese going back and forward, we look at tourism increasing and if you just look at the existing flights that are available at the moment, they are over-subscribed so I think there has been a case that we have been able to make to the Canadian carriers that there is room for another carrier to become available,” he told reporters.

Mr Berman said talks were continuing with the “big carriers” in Canada but “nothing yet has been finalised.”

The United Kingdom last month lifted decades-long visa restrictions for Guyanese, allowing them to stay there up to six months. British Airways in November began serving the Guyana-UK route.

2022-11-29
Denis Chabrol
Previous: Guyana’s medium term annual economic growth projected at 25 percent
Next: Netherlands to apologize for slavery in Suriname and the Caribbean on Dec 19