The University of Guyana (UG), in collaboration with Banks DIH Ltd., has been making progress in baking bread with 25 percent less wheaten flour,  according to Head of UG’s Institute of Research, Innovation and Entrepreneurship Patsy Francis.

She said tests were carried out using cassava flour and sweet potato flour and so far there is a preference for the latter.

Professor Francis said the Office of the President and the National Agricultural Research and Extension Institute (NAREI) are also engaged in the project, and a Caribbean conference on the use of other flours is scheduled to be held in Guyana early next year.

Appearing on a  UG School of Entrepreneurship and Business Innovation webinar to mark Entrepreneurship Month, she said samples of the bread were last week taken back to the Turkeyen Campus for persons to examine the produce based on look, feel and taste. “Couple of nights ago, we baked bread there and we brought it back to campus where we had sensory evaluation right here on campus and it seems, without looking at the stats, it seems as though it’s good to go so in the very near future this bread should be on the market,” she said. The bread, she said, was being baked at Banks DIH.

Dr Francis said UG’s Institute of Research, Innovation and Entrepreneurship, along with the Faculty of Agriculture and Forestry’s Agro-Technology and Business graduate programme and the Faculty of Natural Science, has been spearheading the partial wheaten flour substitution.

She forecasts that when the mixed flour bread hits the market, it would stimulate the value chain from the farmer to the processor and consumers. “There are various arms of this engine which is being done by different people,” she said.

The Student Entrepreneurial Enterprise, she said, is providing some funds to scale-up ‘bench-top’ projects to actual field work. “The impact is going to be tremendous and I am just asking for everyone to be on board with us and to know that we need more facilities, we need more staff,” she said.

Speaking with Demerara Waves Online News, she said being aware of the possibilities of indigenous flours, a UG Graduate student in Agro-Technology and Business Mr Humphrey, has been playing a major role over the past year and a number of challenges have had to be confronted. “We encountered many difficulties because these other flours behave somewhat differently to wheaten flour and so after the first trial, we decided to engage the food scientist at Banks DIH and with their help we were able to overcome the problems associated with producing a bread that is comparable to a bread made out of wheaten flour only,” she said. 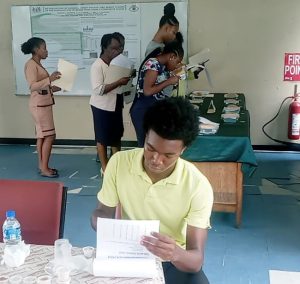 The Caribbean and American-trained Agriculture Scientist was elated at the quality of bread that was produced last week, describing it as a “resounding success.” She explained that cassava and wheaten flours were being used from 5 percent to 25 percent to determine which level could work and what they produce. “We have found that the highest level of 25 percent is very acceptable. All of the lower inclusions are also acceptable but the higher the levels of inclusion, the better it is for the replacement of wheaten flour as well as for the health benefits which we are targeting,” she said.

Sensory assessments of the bread, she said were, conducted at the University of Guyana and at Mocha Arcadia and consumers have reported “very good” responses based on colour, taste and appearance. “I would say that they are all comparable to the wheaten flour alone. The colour is the same and the taste, though, people seem to be going more for the bread that has the greater amount of sweet potato flour and so, without looking at the data, we get the sense that this sweet potato inclusion is the one that people want,” she said. In addition to appearing the closest to wheat flour bread, Dr Francis said many persons are aware of the health benefits of sweet potato flour bread. No additives were used in either the cassava flour or sweet potato flour.  In terms of texture and moisture content, she said the “slice test” has seen many persons reporting the same texture and the “mouth feel” is good.

The next level, she said, would entail production by Banks DIH and 36 other city-wide bakers.

Supply of cassava and sweet potato 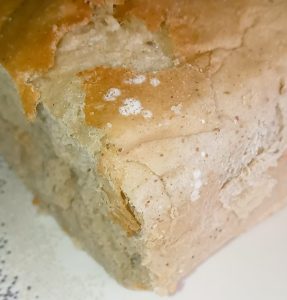 Bread made from wheaten flour and sweet potato flour

Professor Francis said several other agencies were working on different aspects of the value chain. The University of Guyana’s Faculty of Agriculture and Forestry, in collaboration  with the University of Arkansas,  is working on producing clean planting material which are free from viruses and NAREI is hoping to produce material from other infectious agents.

The demand for bread, for instance, among the 36 bakeries in the city, is not immediately known, and Dr Francis said they would be consulted to ascertain the projected demand for sweet potato flour.

The Caribbean Agricultural Research and Development Institute (CARDI) is examining the gaps in the value chain as part of a regional project while the Inter-American Institute for Cooperation in Agriculture (IICA) is examining the provision of technology. Dr Francis identified the need to establish several processing facilities to quickly move sweet potatoes from the field to flour.

The Food and Agriculture Organisation of the United Nations has been pushing the use of cassava mash with wheaten flour to produce bread but Dr Francis said that is susceptible to fermentation and molding when transporting over long distances or storage.

She related that Retired Major General Joseph Singh of the Office of the President has put together a multi-agency team that is examining the use of indigenous flours.