Manhunt for Wismar teacher’s killer after they broke up 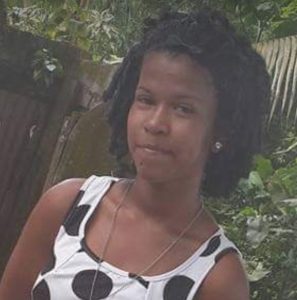 Police in Linden were Monday morning continuing their manhunt for the prime suspect in the killing of a teacher after she broke up their relationship.

Dead is 22-year Kelly Charlotte who lived at 790 One Mile Extention, Wismar, Linden.

Police said they are looking for the son’s father, a 28-year-old truck driver of One Mile Extention Wismar, Linden.

Charlotte was stabbed to death at about 9:15 Sunday night at her residence which she shared with her 27-year old sister after she separated from her child’s father.

Investigators were informed that the now deceased woman ended the relationship with the suspect and was living with her sister.

According to the deceased woman’s sister, at about 10:00 Sunday morning,  the suspect visited the home and collected his son.

At about 9:15 Sunday night,  the suspect returned the child to the house, and Kelly Charlotte went to the front door to collect the child.

The sister stated that she was in the kitchen when she heard Kelly shouting her name.

“The woman immediately ran to the front of the house, where she saw the suspect stabbing her sister (Kelly) about her body with a knife,” the Guyana Police Force said in a statement.

The woman immediately called the police while the suspect made good his escape on foot.

The teacher was taken to the Linden Hospital Complex by police ranks, where she was pronounced dead on arrival.