US to remove barriers on food; develop “common” food certification system with Caribbean 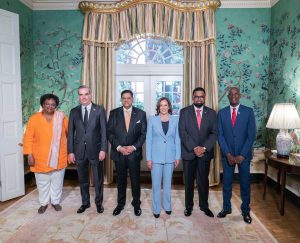 The Caribbean Community (CARICOM) and the United States (US) have agreed to craft a single food certification regime to facilitate the free trade of agricultural produce within the region and that North American nation, President Irfaan Ali said Thursday.

He made the announcement in a video release following talks he and colleague CARICOM leaders held with US Vice President Kamala Harris in Washington DC.  “We’ve agreed that we are going to have a common agenda in which we’ll support a common certification programme-sanitary and phytosanitary programme- that would ensure that all of us are operating on the same playing field and that the barriers to trade are removed,” he said.

The US and CARICOM+ Dominican Republic earlier this year at the 9th Summit of the Americas agreed to increase cooperation in the areas of energy, food security and access to finance.

For her part, the US Vice President said her country would “promote good agricultural practices and do what we can to enhance those practices in the Caribbean” and “we will remove non-tariff barriers to facilitate movement of the food in the region.”

The President said the CARICOM and US delegations also discussed transportation and logistics, a major constraint to regional agriculture. Vice President Harris, in her opening remarks at the meeting, also alluded to efforts being made to address the transportation woes but she did not provide details. “We will contribute to addressing the logistical barriers to transportation and, as we know, that is a very important detail when we are talking about combatting food insecurity anywhere and in particular in the Caribbean,” she said. Dr Ali did not immediately provide additional information on this aspect when he was contacted.

Ms Harris said already the US has provided US$28 million to the Caribbean to address food security and was now set to introduce climate smart technology into the food protection system and provide training in areas such as pest management which “must be addressed.” The President of Guyana said he asked the US for another US$25 million through grants and low-interest loans for women and youth in agriculture especially for projects on sustainability, technology and research. “These are projects that will ensure resilience in the food production system (and) encourage young people and women to participate,” he said.

Trinidad and Tobago’s Prime Minister Dr Keith Rowley is co-chairing the CARICOM-US committee on energy security; Barbados’ Prime Minister Mia Mottley on access to financing and the President of Guyana on food security.