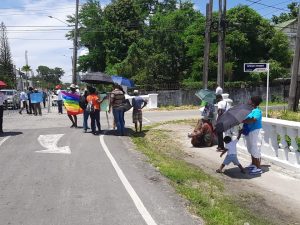 A small gathering of persons outside the Guyana Elections Commission in response to a protest call for a clean voters list.

Attorney General and Minister of Legal Affairs, Anil Nandlall on Tuesday said the current constitutional provisions and laws governing elections  could be changed if the constitutional reform commission accepts such proposals.

Mr Nandlall said when the constitutional reform bill is approved and the commission, made up of 50 percent each of parliamentary politicians and civil society, the opposition would be free to table proposals. “They will have their say at the appropriate time,” he told Demerara Waves Online News.

Giving a glimpse into the proposed amendment to the relevant election laws, he said it would now be mandatory for the Guyana Elections Commission (GECOM) to remove the names of dead persons. “Apparently, it is not clear. It is not being done but we are now making it an obligation and I believe it will carry a criminal offence if there is a breach of that obligation,” he said. 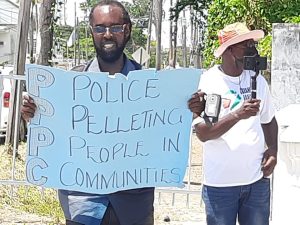 Speaking with reporters outside the Guyana Elections Commission (GECOM) where a handful of persons were staging a protest to press demands for a clean voters list, Executive Member of the Working People’s Alliance (WPA) Tacuma Ogunseye said there was need to scrap the “corrupt” voters list because, bloated with almost 700,000 names of adults, it could not produce credible elections.  “I support any constitutional reform that is targeted to the electoral system to make it more accountable and make it more credible and in terms of biometrics and a new voters list, surely I would support and the WPA will support any change in the electoral law to make that possible,” he said. He restated that constitutional reform should bring an end to winner-takes-all politics and provide for power-sharing after elections.

One of the estimated 20 persons on the picket line condemned President Irfaan Ali’s behaviour at a community meeting at Mocha-Arcadia, but said he was disappointed at the turnout of the protest.

Attorney General Nandlall reminded that the constitution and the law prohibit the removal of persons names from the list on the grounds of residency.