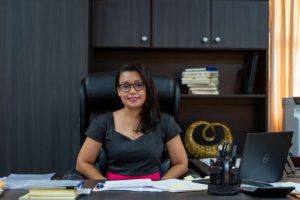 Ms Rodrigues said the Ministry of Human Services was also poised to provide assistance to the residents. The Civil Defence Commission and the Guyana Police Force confirmed the damage. “That report is imminent and we’ll proceed from there because we want a proper analysis of the damages and so on,” she said.

Police said the roofs of several houses between 18th and 20th Streets, Bareroot were lifted off by the heavy winds between 10:30 AM and 12 PM.

The opposition coalition of A Partnership for National Unity+Alliance For Change (APN+AFC) said a team from the Opposition Leader’s Office visited the communities where they observed that a number of roofs were partly or fully lifted off and residents lost furniture and personal effects.

Ms Hazel Pyle-Lewis said the coalition team assisted a resident to receive medical attention, and a number of tarpaulins were provided to affected residents. She said since the storm no government minister has visited the areas. “The APNU+AFC calls on the government to treat the situation as an emergency and launch an urgent response and rescue efforts to ensure that affected families can immediately dwell in comfort and safety. We call on the government to also undertake a damage assessment and offer financial and other support to ensure families can continue their normal lives by recovering their 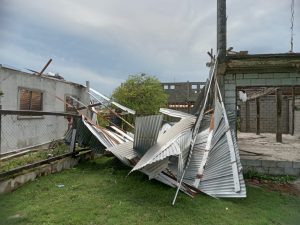 homes and belongings,” she said.

The CDC on Monday began conducting an assessment with a view to shifting affected residents to a shelter, if required, and dispatching a report to the government for further action.