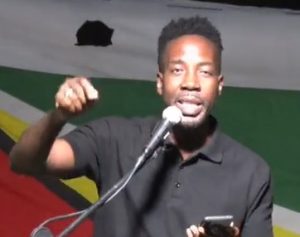 The opposition coalition of A Partnership for National Unity+Alliance For Change (APNU+AFC) has retaliated at government’s move to ask for details about how the government-funded International Decade for People of African Descent- Guyana (IDPADA-G) has spent an estimated GY$500 million over the past four years.

He urged opposition supporters to demand accountability for monies that have been allocated and spent by those state entities. “Folks, these are the questions that you need to ask. Don’t let Jagdeo come and tell you stupidness. When he come and talk stupidness, you shy these numbers in his chest. Tell him: ‘where the money gone’,” he said.

In response to a request by the Minister of Culture, Youth and Sport Charles Ramson for detailed records on how IDPADA-G has spent the funds allocated by government, the Chief Executive Officer of that organisation, Olive Sampson has since responded and attached a copy of a a report on an audit that had been conducted by the Central Internal Audit Unit of the Ministry of Finance for the period 2018-2021.

IDPADA-G has also offered government to agree to an independent auditor to audit its records from January 2022 to present.

Mr Jagdeo, through his lawyer, has defended his utterances as fair comment in his quest for accountability of public funds.  He has publicly asked for evidence that Afro-Guyanese have benefitted from the GY$500 million that have been received from government.