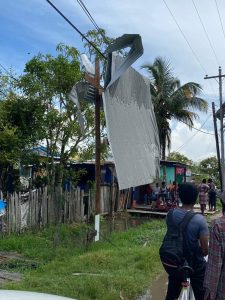 A freak storm on Monday damaged several houses at Bareroot,  East Coast Demerara, according to to the Director-General of the Civil Defence Commission (CDC), Nazrul Hussain.

He said a team of CDC officers have been dispatched to the area to conduct an assessment, but so far that agency has been informed that “six or so houses have been affected by a freak storm; mainly the rooves were damaged.”

Col Hussain said in some instances entire rooves were “blown off”. He said technicians from the Guyana Power and Light  and Guyana Fire Service firefighters were in the area because a number of zinc sheets landed on electricity cables.

The CDC Director-General said the relief agency could assist affected residents to relocate to temporary shelters if required, and repairs would be left for central government to decide.