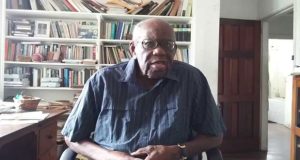 “Rashleigh’s service to Guyana in another sphere needs also to be recalled as he leaves us. It is in relation to Venezuela’s threat to the Guyana Rashleigh helped to build. From Independence, through the 12 years of the Protocol of Port of Spain, and 27 years of Venezuelan filibuster in a thwarted UN good offices process, Rashleigh laboured in Guyana’s cause – and so to the very end, with diplomatic wariness and passion,” Sir Shridath said.

Jackson was 93 years old at the time of his passing at his Nandy Park, East Bank Demerara home.

He served first as Permanent Secretary of the Ministry of External Affairs while Sir Shridath was Minister. Mr Jackson then served as Foreign Minister from 1978 to 1991 when he retired. He also served as a consultant in the oil sector on border matters and sat on a bipartisan committee on foreign relations under the 1992-2015 People’s Progressive Party Civic (PPPC) administration.

Foreign Secretary of the Ministry of Foreign Affairs, Robert Persaud noted that Mr Jackson, who served under the People’s National Congress (PNC) administration, was part of a united national front on the protection of Guyana’s sovereignty. “Condolences to the family of the late Rashleigh Jackson, a former Minister of Foreign Affairs under the PNC administration but one whom aligned himself with critical interventions by PPP/C governments in defense of our territorial integrity and sovereignty,” Mr Persaud said.

He served as Guyana’s Permanent Representative to the United Nations, and had played a major role in the international struggle for the liberation of southern Africa as well as the formative years of the now dormant Non-Aligned Movement.

Sir Shridath said he and Mr Jackson helped to build Guyana’s foreign service from 1966 when Guyana attained political independence from Britain. “Together we built our fledgling Foreign Service that was to serve Guyana’s needs as a new micro State beset by existential threats. Few more than me can vouch for the quality of the Ministry’s service to Guyana under Rashleigh’s guidance: names like Rudy Collins, Anne Jardim, Miles Stoby come to mind – and there were others,” he said.