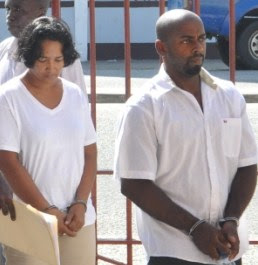 The Caribbean Court of Justice (CCJ) on Friday quashed the murder conviction of Jarvis Small for the murder of 16-year old Neesa Gopaul whose body was found inside a suitcase submerged in a creek on the Linden Soesdyke Highway.

He said, however, that her appeal was allowed in part by reducing her sentence from 30 years imprisonment with no eligibility for parole before the expiration of 15 years. This means, he said, that five years will be deducted for time spent in custody while she was on remand.

The CCJ found that Guyana’s law provides for murder convict should be sentenced to life imprisonment or such other period being not less than 15 years, rather than 106 years that had been imposed on Gopaul. “The court found that, in this case, there had been no fair and just sentencing process,” Justice Barrow said, adding that the 106 year sentence with a starting point of 60 years as imposed by the High Court “exceeded the life expectancy of a human being and was grossly disproportionate and manifestly excessive.” The CCJ said the High Court’s sentence and the manner in which it did violated the constitutional right to a fair hearing and tantamount to inhuman and degrading punishment. Also, the Guyana Court of Appeal’s 45-year reduction was “manifestly excessive” and the period of ineligibility for parole was not stated.

The CCJ, however, increased the upper limit to 22 years as a starting point for sentencing because the victim was a minor, there was a special relationship of trust, the perpetrator was a parent, the degree of blunt force to the head, method of disposal of body and lack of remorse by Gopaul.

Neesa’s body was found inside the suitcase, along with her passport and other documents, on March 2, 2010.

Small’s request for separate trials was refused and his lawyer at the end of the trial said there was no case for him to answer was also refused by the Guyana High Court. Bibi Gopaul was sentenced to 106 years and Small, her lover, was sentenced to 96 years.

They filed separate appeals to the CCJ which were consolidated, and on Friday the CCJ ruled by a majority that there was no evidence and it was  pure speculation that Small planned to kill Gopaul to avoid being  prosecuted for sexually assaulting her, no evidence that he had possessed the pair of dumbbells that was found  in the suitcase with her body, and it was impossible to conclude that he was the killer because he said he knew who was the killer. “As these were the only matters of evidence against Small, the court was satisfied that the trial judge should have upheld the submission that there was no case for Small to answer and directed his acquittal,” Justice Barrow said.

The CCJ observed that there was a “paucity of evidence” against Small at the start of the trial and his request for separate trials should have been granted. He was convicted based on evidence that was completely against him, the court found.

Referring to accused fraudster Simone De Nobrega’s testimony that Small had confessed to his role in young Gopaul’s murder, the regional court said that evidence should not have been put to the jury.

De Nobrega’s evidence was that while she was in the lockups with Gopaul, she (Gopaul) and Small had an extramarital affair and he eventually encouraged her to kill her husband which she did by poisoning him. The evidence in Guyana’s courts was that Neesa heard that her mother had killed her father and she reported the matter to the police. Further, after Bibi and Small learned that Neesa was planning to pursue the matter with the police, they hatched a plan to kill her and make it appear as though she had escaped from home.

The prosecution’s case was that Small strangled Neesa and bludgeoned her and the next day took back the body, placed it in a suitcase and submerged it into the creek.