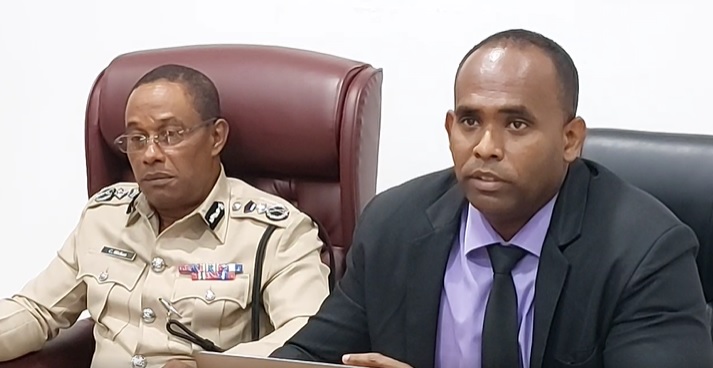 The Guyana Police Force (GPF) on Wednesday sought to discredit claims by embattled Sergeant Dion Bascom that there was a cover up the gunning down of Ricardo “Paper Shorts” Fagundes more than one year ago outside Palm Court, Georgetown.

Instead, that law enforcement agency said it was getting international help in the hope of bringing to justice those responsible for Fagundes’ killing. “What is unknown to Mr Bascom is hat the Guyana Police Force is currently being assisted by an internationally recognised law enforcement agency in conducting the Ricardo Fagundes murder probe. Several foreign experts/ investigators visited the CID (Criminal Investigations Department) headquarters during the initial stage of the probe and provided valuable assistance to our investigators,” said Crime Chief, Deputy Commissioner Wendell Blanhum at a news conference.  He added that the police force was awaiting results of an analysis of several items that were found at the crime scene. “This is unknown to Mr Bascom so you’re pointing fingers that the Guyana Police Force is covering up this investigation. Are you pointing fingers also to say that our overseas counterparts are also covering up this investigation: That is how ridiculous and absurd these allegations are,” he said.

Police Commissioner Clifton Hicken did not provide direct answers to questions about what had been done since February, 2022 when Sergeant Dion Bascom said in a formal complaint to police that a senior police officer and another police officer had taken GY$30 million to cover up the killing of Fagundes. “I was not the acting Commissioner in February.

Mr. Hicken attempted to separate himself from Mr Bascom’s statements in February, 2022 by saying that at that time he was not Police Commissioner, but when told that his response was being sought on behalf of the force as an institution he maintained that he could only answer for his tenure

“As the Commissioner, I superintend over the force now and I can tell you that date from when I took over the helm of the force,” he said.

Mr Blanhum  said when those reports were lodged at a police station and the Office of Professional Responsibility, an investigation was conducted. “That is to the best of my knowledge and Mr Bascom denied ever speaking to the press.”  Mr Blanhum said he was not aware that in February “when the matter was first ventilated that he made any allegation about corruption and pointing fingers at Mr Caesar.”  Assistant Superintendent Mitchell Caesar has since denied Mr Bascom’s allegations and has threatened t0 file a defamation lawsuit, and Mr Bascom’s lawyer, Nigel Hughes,  has since said there would be no retraction and they are ready for a legal battle.

In a statement dated 7th February, 2022 that accompanied Mr Hughes letter to the President, Mr Bascom claimed that a city gold dealer’s son had paid two police officers GY$30 million to cover up the killing of Fagundes. Mr Blanhum would only say that there was a 100 percent increase in the amount of money that was being peddled on the streets, but he did not say whether the officers were asked about whether they had received a bribe.

Mr. Blanhum played several segments of  Sergeant Bascom’s expletive-laced outbursts on Facebook and sought to “debunk” each of them with evidence of WhatsApp chats with a reporter and a lawyer for drug convict Roger Khan who was Fagundes’ close friend.

Meanwhile, gold dealer Azruddin Mohammed on his Facebook Page, Team Mohammed’s stated that, “I want the world to know that I am straight and do not indulge in ‘hanky-panky’ business.” Mr. Mohammed indicated that he was in no way involved in Fagundes’ killing. “Concerning ‘Paper Shorts’. I must say that he was a friend of ours through the racing fraternity. He was well-known to my father since he assisted him financially. We also assisted him to establish his pawn shop and restaurant and also financed his safari trips. The question lingers, why would I want to harm him or matter in fact, any human?,” he said.

Staying clear of mentioning names, Mr Mohammed said a competitor of his is a close friend of a detective who levelled accusations about cover-up in the murder of  a “friend of ours.”