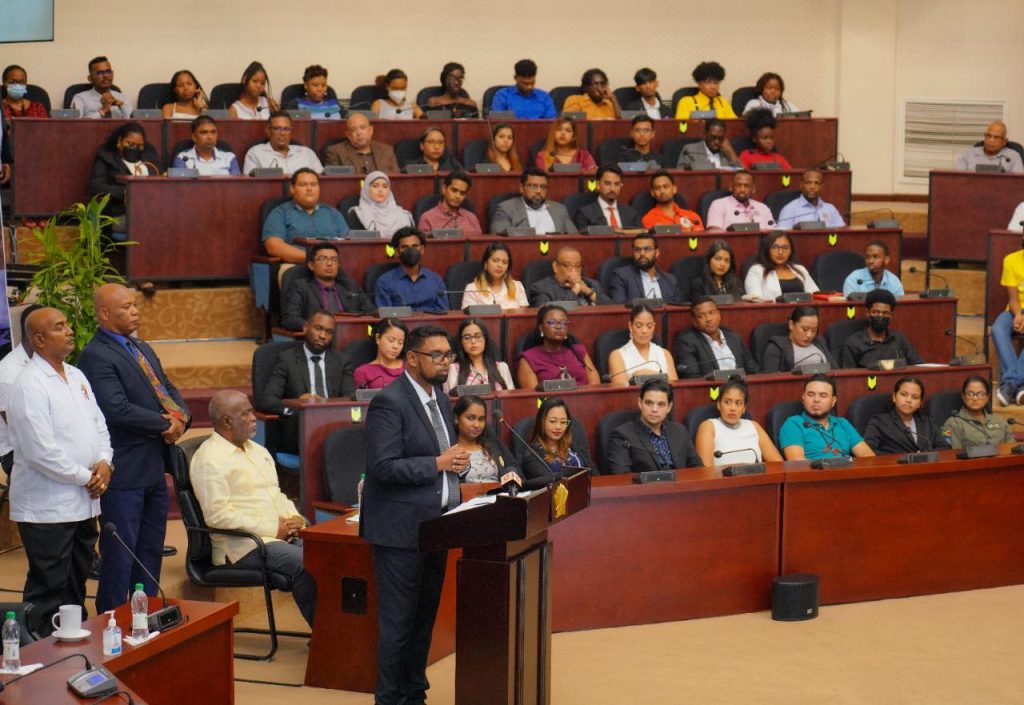 The Presidential Youth Advisory Council, which was launched on Friday, is aimed at involving youths in crafting government policy and create the space for the emergence of new policymakers and possibly politicians.

Launched on International Day of Youth, President Irfaan Ali stressed that the “diverse” group of young persons from a range of professions and occupations would be exposed to strategies to develop Guyana.  “Later they may decide that they may want to get into the political realm of things but they are here because I believe strongly that we need our young people and people to be critically integrated into the policymaking and policy implementation of our country  they can have a thorough understanding, an in-depth understanding of how policies are determined, why they are determined and they can contribute to the finalisation of policies and programmes that will take our country forward,” he told the launch that was held at the Arthur Chung Conference Centre, Liliendaal, Greater Georgetown.

The President noted that the Advisory Youth Council reflected the make-up of Guyana as the members are drawn from various backgrounds, professions and occupations. “This composition is not a political composition but it is a national composition because, as I said to the young people, political decisions and policymaking affect us everyday,” he said, adding that “we have a mix and I don’t think we can have a better representation of what One Guyana is.”

And Minister of Youth, Charles Ramson said the formation of the Council was not a publicity stunt but a 2020 general and regional election campaign promise. “This is not a political gimmick. It is very important that you understand  why you are here and how important it is that you are here and the country is going to change ; more importantly it is going to transform. We get to define, however,  how the country is going to transform,” he said.

In clear reference to the 2020 general and regional election  fiasco over multiple results especially for Region Four (Demerara-Mahaica) that could have decided the overall outcome of those polls, Mr Ramson noted that among the Youth Advisory Council members are those who participated in the “defence of that democracy.”  “It took courage because, while the political leaders from our side were leading that charge, we still needed that support” that was Social Media driven.

Mr Ramson highlighted that historically the governing People’s Progressive Party (PPP) has appointed young persons as ministers, a practice that he said that party’s General Secretary Bharrat Jagdeo has continued.  He sought to assure that the Council would be engage with President Ali  to “fortify and amplify the voice of young people in the decision-making process” so that all of the projects, programmes and policies could be shaped by youths.

President Ali added that, “It is important that young pe0ple are involved in the definition and the implementation of the policies and programmes that are aimed at taking us to a place that we term development- what constitutes that development and what are the elements of that development.” Dr Ali said the Council would function at the district, regional and national levels to deliver goods and services, assist in evaluation, work with Toshaos in hinterland communities, interface with banks, engage in sport activities and work with the Ministry of Education in subjects such as Mathematics and English. “They will be the next generation of policymakers and understand how policies are formulated. They will know the truth of everything. They will be exposed to why decisions are made…so they can be the voice of the future,” he said.

Meanwhile,  against the background that more than 50 percent of the Council being females, he expressed concern that “we are losing our men,” a phenomenon that he said is reflected in enrolments at the University of Guyana and the GOAL scholarship programme. “And we need to nip this in the bud, too, because we cannot lose the males going forward. They have to step up and take responsibility. They have to be part of the development pr0cess and programme of our country,” he said.