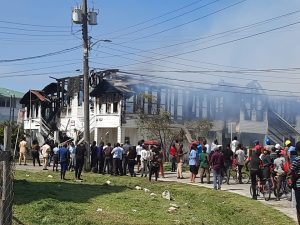 A mid-Wednesday afternoon fire that virtually destroyed the St George’s High School on North Road/ Church Street, Georgetown has seen top officials of the Ministry of Education almost immediately activating plans to relocate the more than 400 students and teachers.

“We know that there were 421 students coming to this school and they will not have school in September… We have to firmly and quickly determine where the students will be placed; if all of them could be relocated to one other school or we have to split them up and then determine the needs of those schools,” Minister of Education Priya Manickchand told reporters at the scene.

Ms Manickchand said most likely the student population would have to be split up among other schools.

The cause of the fir, which began on the front of the lower flat of the decades-old colonial era wooden and concrete building,  was not immediately known. 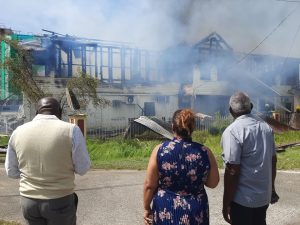 Left to right: Chief Education Officer Marcel Hutson, Minister of Education Priya Manickchand and Minister of Home Affairs Robeson Benn at the scene of the fire.

The fire was aided by a steady north-east breeze, even as more than five fire tenders supplied water to the numerous firefighters.

A number of loud explosions was seen which caused a gush of additional flames.

Home Affairs Minister Robeson Benn said he was satisfied with the response by the Guyana Fire Service. “I’m quite happy with their response. As I said, there was some difficulty coming along. The extra personnel had to disembark and run to get to the scene but I am very happy with the response,” he said when asked by Demerara Waves Online News.

Within the past two years, fire has destroyed sections of the North Ruimveldt Multilateral School and the Mabaruma Secondary School.

A teacher told the Minister of Education that she and students were reviewing work when she realised there was a fire. She said he succeeded in driving her car out of the compound.