The High Court will next month rule on whether President Irfaan Ali breached Guyana’s Constitution by appointing Assistant Commissioner Clifton Hicken to act as Police Commissioner in the absence of an Opposition Leader with whom consultations are constitutionally required.

Chief Justice Roxane George-Wiltshire set August 11 when most likely a decision would be given on whether the President correctly invoked the doctrine of necessity.

Opposition Chief Whip Christopher J0nes, through his lawyer Roysdale Forde failed to convince the court that “all decisions” taken by Hicken be declared as “unlawful” , but in the end said he had no evidence of “all” the decisions and instead all recent promotions should reversed. “I would have to know what those ‘all acts’ are because they may have some serious repercussions…You would have to produce the evidence in relation to ‘all” otherwise that can create chaos,” the Chief Justice said.

Mr Forde said he and his client could not produce evidence of all those acts because they do not have the database, a collection of all acts done by Mr Hicken and, in this regard, we seek to rely  and to have that order amended to reflect that we can only produce evidence in relation to this so that any other act, necessarily by consequence, will not be affected by it,’ the lawyer said.

The Chief Justice also asked Mr Forde whether he wanted the court to accept that he did nothing else to which he said there was no evidence that he did anything else. Mr Forde said the Court’s requested amounted to an “extremely heavy burden” to prove.

“When asked for evidence that could form the basis for a rational grant of the reliefs, a plea is advanced that it’s a heavy burden,” said Mr Nandlall in his arguments to the court. 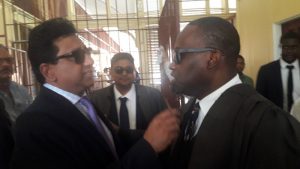 Attorney General Anil Nandlall, in quoting that identical constitutional provision, said the President appointed Mr Hicken based on the “context” at that time.

But Mr. Nandlall questioned the constitutionality of that correspondence to Mr Hoppie, saying that it had been signed by the Permanent Secretary of the Ministry of Public Security, Daniella Mc Almon rather than the President.  The Attorney General cautioned against appointing someone to perform the functions of the Police Commissioner without due regard to other circumstances. “This power is being exercised by a Permanent Secretary instructing a person to perform the functions of  Commissioner of Police, completing subverting Article 211 and Mr Forde relies on this document. Your Honour this characterises the entire case that is before the Court,” he said.

The Chief Justice noted that Mr. Forde’s contention on that point lacked merit because at that time there had been a sitting Opposition Leader and Police Service Commission on July 30, 2020.