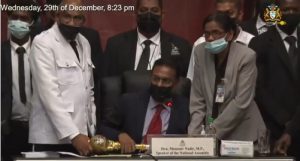 A replica of the mace before the Speaker Manzoor Nadir before Governance Minister Gail Teixeira put the question for the National Resource Fund Bill to be read a third time. (file picture)

Eight opposition A Partnership for National Unity+Alliance For Change (APNU+AFC) parliamentarians could be suspended from four to six sittings for their alleged role in disorderly behaviour late last year in an effort to block debate and passage of the Natural Resource Fund law.

But already, one of the lawmakers, Ganesh Mahipaul, said he and his colleagues were not given a right to a fair hearing because the parliamentary bipartisan Privileges Committee did not respond to their request for  details of the alleged infringements. “If what you are saying to me is accurate, then it will require us going to the courts for assistance in this matter. But I believe it is pretty straightforward. We were denied our fundamental Constitutional Rights and it is basically illegal to do so,” he told Demerara Waves Online News.

The government members of the Privileges Committee are relying on live video recordings at the time of the incident, correspondence from Parliament Building Staff and accounts by the media and other persons.

Questioning the jurisdiction of the Privileges Committee on the grounds that the National Assembly was not properly in session after 8 PM on December 29, 2021 because no extension had been sought, the parliamentarians have in almost identical letters denied committing any infraction.

Based on the report of the Privileges Committee, Opposition Chief Whip Christopher Jones, Sherod Duncan, Natasha Singh-Lewis and Mahipaul would be suspended from four consecutive sittings for conducting themselves in a gross disorderly, contumacious, and disrespectful manner, and repeatedly ignoring the authority of the Assembly and that of the Speaker, and thereby committing contempt and breaches of privileges.

Also parliamentarians Annette Ferguson and Vinceroy Jordan would be suspended for six consecutive sittings for additionally for committing serious violations which were severe and egregious by unauthorizedly removing the Parliamentary Mace from its rightful position in a disorderly fashion, causing damage to the Mace, injuring and assaulting a staff of the Parliament Office, while attempting to remove the Mace from the Chamber.

Further, parliamentarian Tabitha Sarabo-Halley, according to report, would be suspended for six consecutive sittings for unauthorizedly entering the communication control room of the Arthur Chung Conference Centre (ACCC) and destroying several pieces of audio-visual equipment, being public property.

Supporting correspondence to the Privileges Committee states that the damaged equipment valued GY$351,900.00

The conduct of the eight lawmakers on December 29, 2021 was referred to the Privileges Committee

After much deliberation, the Committee had on March 7 asked the legislators to to “show cause in writing” to the Clerk of the National Assembly by March 7, 2022 why that body should not recommend to the Assembly that sanctions be imposed on them.

During the chaotic scene, many APNU+AFC parliamentarians had walked around the National Assembly chanting and blowing whistles in an attempt to prevent debate and passage of the Natural Resource Fund Bill. Prime Minister Mark Phillips and other government ministers had formed a human chain almost around Finance Minister Dr Ashni Singh as he was speaking on the Bill.

After the mace had been removed by Ms Ferguson, House Speaker Manzoor Nadir said the session had continued with a replica mace. The opposition has since challenged the legality of that sitting on the basis that the original mace was not in place and no one was aware of a replica mace.