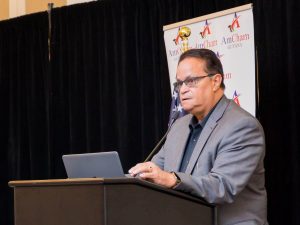 The Guyana government is worried that Venezuelan secret agent operatives might be among migrants who are fleeing the harsh socio-economic and political conditions in that neighbouring South American nation.

“You could understand the security dilemma we face that in the migrants could be embedded Venezuelan agents and so this is not something that we don’t appreciate, that we are looking at as well as we open our arms with compassion and with humanity,” National Security Adviser, Gerry Gouveia told a recent security forum that was held by the American Chamber of Commerce- Guyana.

There are an estimated 60,000 Venezuelans in Guyana.

Venezuela is claiming the mineral and forest-rich Essequibo Region and the Atlantic waters. The International Court of Justice (ICJ) is considering Guyana’s request to find that the 1899 Arbitral Tribunal Award was full, final and perfect.

He also told the event that Venezuelan “non-state actors” were also involved in illegal activities because of the “fragile conditions” in their country. “They are creating enormous problems for Guyana. A lot of non-state actors, for example, on our Western border that are terrorising our business people, challenging our security forces…whether it is orchestrated or not,” said Mr Gouveia.

The National Security Adviser also said there Venezuelan warships were engaged in ” a lot of incursions” of Guyana’s Exclusive Economic Zone and warplanes “are entering our airspace.”

Mr Gouveia stressed that Guyana has been accommodating Venezuelans, including Indigenous Indians, by creating settlements in the North West District. Describing them as resourceful, he said many of them who travel to the coastland are being gainfully employed.