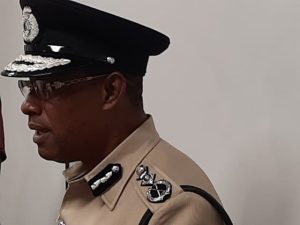 Despite strenuously objecting to Attorney General Anil Nandlall’s request to for an extension affidavit in defence to deal with recent correspondence and the doctrine of necessity in the appointment of Mr Clifton Hicken as acting Police Commissioner, Chief Justice Roxane George-Wiltshire on Friday allowed the application.

Ms George-Wiltshire, however, said Mr. Nandlall would have to pay GY$50,000 in court cost upfront at the time of filing on July 11

The case was adjourned to July 20 for oral arguments.

The Chief Justice also told Attorney-at-Law Roysdale Forde- for Christopher Jones who is challenging the constitutionality of Mr. Hicken’s appointment- that he would not have to file a reply on or before July 13 if the Attorney General’s submission deals with legal principles.

The Attorney General arrived in the virtual hearing, saying that he wanted five days to file an affidavit in defence. Pressed by the Chief Justice for an explanation, he eventually said no draft affidavit was filed because of an exchange of correspondence between President Irfaan Ali and Opposition Leader Aubrey Norton. “The reason being there are currently ongoing between the President and the Leader of the Opposition exchange of correspondence constituting meaningful consultation,” Mr. Nandlall said. He wants the ongoing correspondence to be attached to the affidavit in defence because the issue is non-compliance with the constitution.

The judge said the Court was not concerned with anything after May 30, 2022 when Mr. Jones filed his case and that could not be included, but the Attorney General said “we would be contending” that there was no Opposition Leader in place. He reasoned that if non-compliance was impossible because of a “physical impossibility” but once that has changed compliance must be taken at the earliest opportunity. “The correspondence that I am seeking to put before Your Honour are intended to assist the court in addressing the issues of law that invariably arises there,” Senior Counsel Nandlall said, adding that the documents were not previously available.

Under unrelenting pressure from the Chief Justice, the Attorney General eventually gave doctrine of necessity as the legal principle that he intended to form the basis for his affidavit in defence. Ms. George-Wiltshire said “it was very clear” in a previous filing that a Police Service Commission was not in place and that a Leader of the Opposition was not appointed.

He told the court that no correspondence, which was not in existence at the time of the filing, is “irrelevant and is not fair to be brought in at this time.”

Mr Forde noted that there is another pending case concerning the constitutionality of the appointment of the Chairman of the Police Commission, Patrick Findlay.