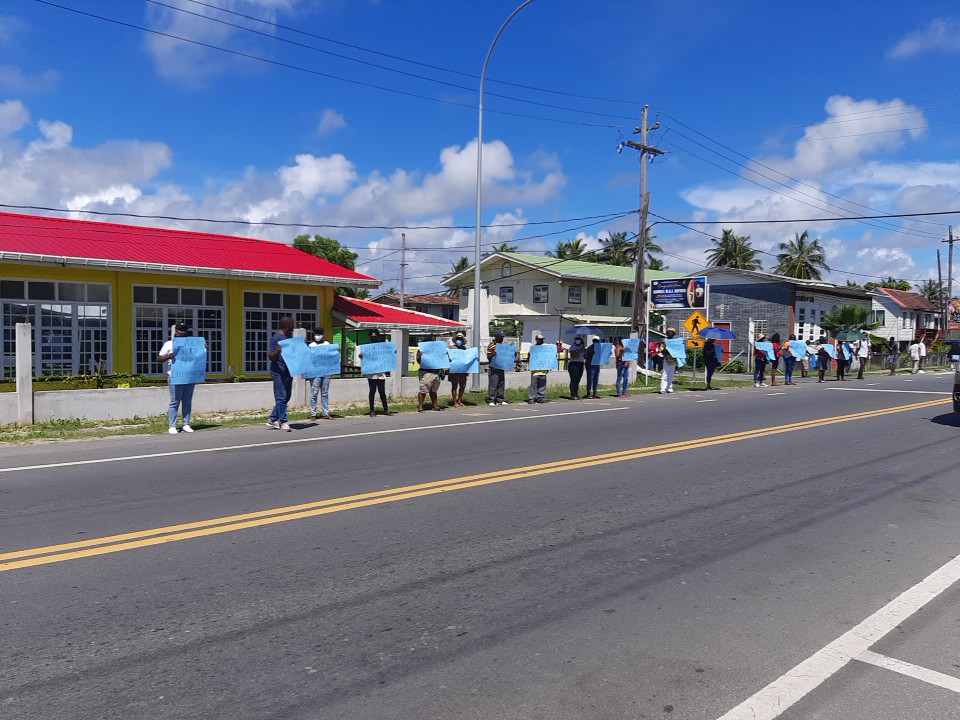 A section of the group of anti-government protesters staging a picketing demonstration on the Buxton Public Road, East Coast Demerara.

As an estimated 100 anti-government protesters on Buxton Public Road on Monday vented their frustration with police killings and alleged discrimination against African Guyanese in the delivery of benefits, a high-level government delegation was meeting with hundreds other villagers and promising to resolve concerns.

In clear reference to the police killing of Essequibo Coast businessman Orin Boston in September 2021 and Quindon Bacchus on the East Coast Demerara on June 10, the protesters chanted “No Justice, No Peace”, “Who Kill Quindon?- government”, “Who kill Boston?-government”. One policeman is to be charged with Bacchus’ murder and two other lawmen with related offences.

Protest organiser, Kidackie Amsterdam said the protest was aimed at highlighting the ills of the People’s Progressive Party Civic (PPPC) administration and the “challenges” being faced by Afro-Guyanese. These include the poor condition of roads in  Afro-Guyanese communities compared to Indo-Guyanese communities; the doling out of monies to fisherfolk, sugar industry workers and farmers but no funds to the Afro-Guyanese dominated public sector. “While I am referring Buxton because I live in Buxton and I know the troubles of Buxton, I am positive because I have seen it exist in 0ther Afro-Guyanese communities and this protest is to bring to the eyes of the world that what this administration is doing is not good for our people, it is not good for the development of this nation,” he said.

Asked whether he and his group would take advantage of the delegation of government ministers at the Buxton Community Centre Ground, Mr Amsterdam bluntly refused to do so, saying that the onus was not him as the protest was long-planned. He said government first sought to dissuade persons from participating in the protest by saying it would have been illegal and then went ahead and planned its meeting with members of the community. “It’s a challenge to the people. They will not set our agenda, we will not go to them. It is their place to come to the people and it is their place to engage the people so with regards to leaving here and going where they are now, that’s n0t any part of my agenda,” said Mr Amsterdam, a member of the Working People’s Alliance (WPA).

Mr Amsterdam warned that if government did not address the highlighted issues, the protest would continue and be taken to “another level.” The demands include rehabilitation of roads and bridges, compensation of residents in Golden Grove who were wrongly shot by police in their businesses and residences, the charging of an Indo-Guyanese policeman with Quindon Bacchus’ murder, award contracts to contractors in Buxton. “Those are the things we want this government to address and we will say they are responding. Until such time, no justice, no peace. The protest will continue,” he said.

WPA Executive Member, Tacuma Ogunseye said last week’s protests by residents of Golden Grove to Bacchus’ murder signaled to the PPP that Afro-Guyanese lack leadership. “We believe that the Golden Grove protest and now this protest is evidence that our people have not been beaten down and our will to resist is strong and will grow from protest to protest,” he said. He echoed Mr Amsterdam’s views that none of the protesters should attend the government meeting. “When we designed our protest was weeks before their decision to come to Buxton and we have to be disciplined. We must not be responsive to them. They have been responding to us since the killing of Bacchus and I think it is important that we allow them to have their activity and in a disciplined way, we have our peaceful activity. We have to marshal and condition our forces for engagements that we control,” he said. 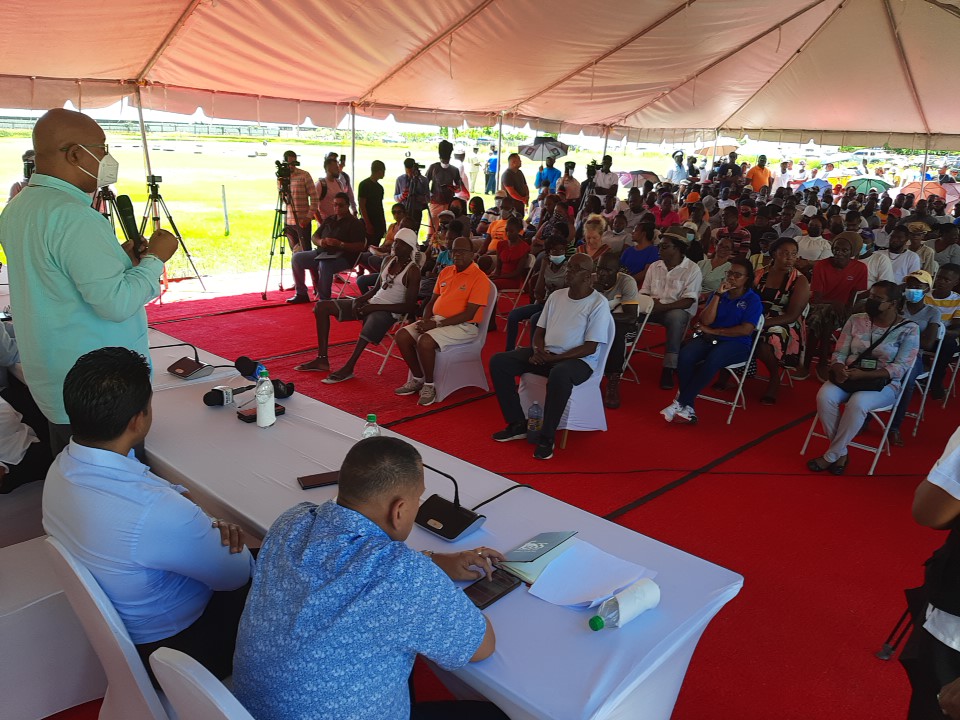 At the Buxton Community Centre Ground, Public Works Minister Juan Edghill was quick to point out that the outreach to that traditional opposition stronghold was not cosmetic but government’s genuine effort to work with all communities. “By no means anyone of us can dismiss today’s event as tokenism,” he told the more than 250 attendees.

He said connector roads within villages to the Railway Embankment Road and the East Coast Public Road and the sea wall have already been already rehabilitated. Mr Edghill said “real employment” is expected to be generated with the eventual upgrade of the Railway Embankment Road from David Street, Kitty to Enmore to accommodate heavy duty and large vehicles as well as allow easy transportation access for small and medium sized businesses in villages.

The Public Works Minister said he and a delegation would next week be meeting with contractors in the village at Tipperary Hall, Middle Walk with a view to ensuring that they are involved in construction works.

As the meeting progressed, government ministers sought to resolve issues concerning farm-to-market roads in the village, employment, University of Guyana attendance, acquisition of house-lots, the allocation of space at the Cheddi Jagan International Airport for small-scale producers and the improvement of sport facilities. In addition to rewiring and the installation of floodlights at the Buxton Community Centre Ground, Minister of Sport Charles Ramson announced the arrival of basketball hoops and land maintenance equipment.

Issues concerning the health sector and health sector workers were also addressed. An overseas-based Guyanese, who holds two Post Graduate Degrees, was encouraged to register with government so that his services could be utilised. An internationally certified coach, who works with young children, appealed for an opportunity to teach in schools in Buxton and other coastal villages in order to imbue in them discipline and develop sport.

Prime Minister Mark Phillips asked residents of Buxton to ignore those who were interested in the development of the village not those who wanted to derail the meeting. “If we are talking development, we have to do away with the detractors of development…Your turnout is sending a strong message to the detractors who never wanted this to happen,” said Mr. Phillips, a Retired Brigadier. While others in Guyana and overseas were using social media “foxholes”, he said the government would continue going into communities to address concerns.
The Prime Minister said no one was being discriminated against in developing Guyana with oil resources regardless of their political persuasion. “Now is the time for development in Guyana and Buxton will not be left out. No village in Guyana will be left out of the development and that is One Guyana. When we talk about One Guyana, we talk about development for all the people of Guyana wherever you are and we don’t care who you voted for,” he said.

Minister of Housing, Collin Croal said when the PPP returned to office in August, 2020, there were 70,000 pending applicants for house-lots and that figure has since increased to 83,000. At the same time, he said under 18 months government has allocated more than 2,600 house-lots on the East Coast Demerara.

He announced that there are other plans in the pipeline to acquire  thousands of acres of lands that would be allocated as early as next month. “Just have patience. All those who are there and are active will be dealt with,” he said.

2022-07-04
Denis Chabrol
Previous: BREAKING: Undercover cop to be charged with murder of Quindon Bacchus
Next: More categories of persons poised to work freely in CARICOM countries