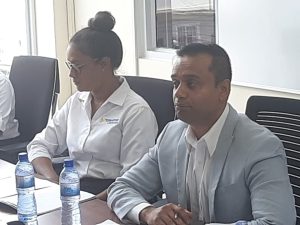 The Guyana government’s Local Content Secretariat and RAMPS Logistics Guyana Inc. are at odds over whether the company met the requirements to operate as a Guyanese company.

Highly-places source on Thursday said RAMPS Logistics Guyana Inc. has been refused local content certification because the company does not have 75 percent Guyanese in management and has not proven the source of the US$1 million by the Trinidad-born Guyanese investor in exchange for the 51 percent Guyanese stake.

But Chairman of RAMPS Logistics Guyana Inc; Shaun Rampersad said there are “only two non-Guyanese” in management, three of the five board directors are Guyanese and overall the company employs 400 persons. In documents released to the media and reportedly submitted to the Local Content Secretariat, the company said 89 percent or 17 of the 19 persons in senior management are Guyanese.

Though no reason has so far been provided for refusing to certify RAMPS Logistics, the source said that the company would eventually “get it”. But Mr Rampersad said his company was faced with “stone cold silence.”  He warned that if the Local Content Secretariat fails to give a reason for not granting the certificate, as a last resort, “the courts are open to redress but I hope it doesn’t get to that.” RAMPS has already dispatched letters from its lawyers to Minister of Natural Resources Vickram Bharrat.

He said after an independent valuation of the company, which has been operating in Guyana for the past nine years and employs about 400 persons, Trinidad-born Guyanese Deepak Lall purchased a 51 percent stake in the entity for US$1 million. Mr. Rampersad said the money would be used to invest in a new cargo airline and a new shipping line to support drilling activities in Trinidad and Suriname.

The company said Mr Lall also “had the proof of funds”, contrary to claims by a government official. Mr Rampersad said Mr Lall’s money is from his Trinidad-based oil and gas company, Qualitex,

Mr. Rampersad said Mr. Lall, who obtained Guyanese citizenship in 2021 because his grandfather is Guyanese, has “strong Guyanese roots, somebody who is well-embedded in the Guyanese Diaspora”  The Chairman of RAMPS Guyana rejected suggestions that Mr Lall obtained Guyanese citizenship merely as a convenience but as someone who was willing to invest in the country. “I don’t feel like Deepak has gotten his passport in 2021 as something of convenience. I think it’s a real big opportunity for him to start investing in Guyana,” he said.

Mr. Rampersad said if the company does not get local content certification, it would be unable to do business in the oil and gas sector and would possibly have to reduce the staff instead of employ another 500 persons through its air cargo and shipping service.

Pressed on how much the company could lose if it does not get local content certification, he said “I am not prepared to say”. He also refused to say whether he believed Western Logistics Inc was being favoured.