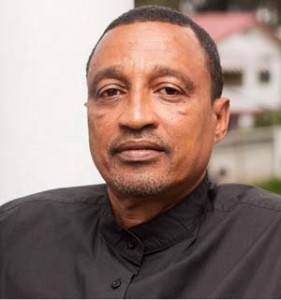 Leader of the Organisation for the Victory of the People, Gerald Perreira.

The Leader of the small non-parliamentary opposition Organisation for the Victory of the People (OVP) political party, Gerald Perreira does not believe there is sufficient evidence in the American Vice News report to link Vice President Bharrat Jagdeo and Chinese businessman Su Zhi Rong to the sale of Guyana to China.

“I don’t think they provided enough evidence. I don’t think so. Identifying one person, one name? One name? One person? Su is one Chinese national in this country. Su does not represent the Government (of the) People’s Republic of China so to use Su there and to say that the Chinese are taking control, that is unfair,” he said.

In her news feature titled “Guyana For Sale”, journalist Isobel Yeung said “the world’s second biggest superpower has a rapidly growing presence in Guyana” through infrastructure projects and China becoming the largest funder of development projects through the Chinese government’s Belt and Road Initiative. She said from what she has gleaned, it implies that the Chinese government knows what is going on.

Mr Perreira believed that there was room for suspicion about alleged corruption which should be investigated. “If Su and Jagdeo got their thing and there is corruption, then Jagdeo should be reined in and be dealt with so what you are getting out, of course, you’re listening, you’re seeing that there is corruption,” he said. Likewise, he said similar action should be taken against the Alliance For Change and A Partnership for National Unity. “None of them is no damn good. Both parties are not committed to transformational politics in this country,” he said.

Stressing that the OVP has never supported the incumbent People’s Progressive Party (PPP), he said the Vice News report clearly targeted the Chinese as part of the United States Embassy’s hidden agenda. “The Vice News only focussed on the Chinese and that is part of the anti-Chinese propaganda and that propaganda is coming from a particular place, from a particular embassy in this country,” he said.

The US Embassy reportedly said on Monday that, “The U.S. has long been an advocate for anti corruption and rule of law in Guyana, as well as a free press. Consistent with Guyana’s laws, accountability is the soundest approach to maintain confidence in government and a level playing field for all investors.”

Chinese businessman, Su Zhi Rong, in the Vice News report, held himself out as a middleman for Vice President Jagdeo allegedly in return for a processing fee that the politician would split between the two of them. For his part, Mr. Jagdeo had said in a secret recording at his Goedverwagting, East Coast Demerara residence to Mr Su and the Vice News journalists, who posed as investors, that he did not get involved in business, Su was his friend and that he would provide support from the government side.

Mr. Jagdeo has since said he would take legal action against Mr Su for alleged extortion and dirtying his character in the process. He said he would also evict him from his residence at Goedverwagting.

The OVP Leader said if Vice News was interested in investigating corruption, then it should have also focussed on what has been allegedly happening in the oil and gas sector, gold mining, wharfage and quarrying. He said ever since the death in 1985 of President Forbes Burnham of the People’s National Congress administration, successive PNC and PPP governments have been selling out Guyana to foreign and local interests. “The sale of Guyana started from Mr Hoyte and continued under every President and administration so there is nothing new running around now about the sale of Guyana. Foreign capital is the problem. Foreign capital is raping this country and also the local capitalist class that has control of the strategic sectors the economy,” he added.

Asked whether he was not taking this position because he has been historically anti-United States and pro-China, Mr Perreira denied that he was batting for Beijing. At the same time, he praised that country’s foreign policy. “I am pro-nothing. I am pro-truth and justice’ That doesn’t make you that if you speak out against US policies, you are pro-China but at least what we can say is that the Chinese have a policy of non-interference in the internal affairs of sovereign nation States, respect for your sovereignty and all that which America and the Western powers do not demonstrate,” he said.

The OVP Leader said that the western nations have a history of removing “progressive” governments from office through various means.

The US is on record as saying that it respects Guyana’s existing territorial boundaries, and it and western nations have been at the forefront of speaking out against efforts to use various numbers to declare the results of the March 2020 general and regional elections. The Caribbean Community, Organisation of American States, European Union, the Commonwealth as well as the United States, Britain, and Canada had all insisted that the national vote recount results be used to declare the winner of the March 202o elections.

Previous: Col. Omar Khan is acting Chief-of-Staff; Brigadier Bess returns next week
Next: PPP has “nothing to fear” from 2020 elections commission of inquiry- Jagdeo