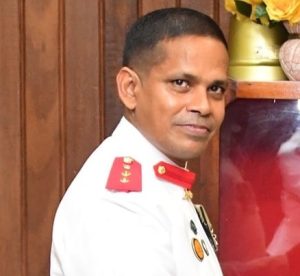 The Guyana Defence Force (GDF) on Monday said Colonel Omar Khan is acting Chief-of-Staff because the substantive Chief of Staff Brigadier Godfrey Bess and the Colonel General Staff, Julius Skeete have been given approval to pursue training overseas.

Acting Chief-of-Staff, Brigadier Godfrey Bess will return to office next Monday, 3rd July, 2022, at the end of a three-week residency of a two-year distance education programme being offered by the United States Army War College, the GDF said in a statement.

Colonel Kenlloyd Roberts will act as Colonel General Staff in the absence of Mr. Skeete, the GDF said.

“The Guyana Defence Force remains committed to the training and education of our Officers and Other Ranks and is thankful for the opportunities offered by our regional and international partners,” the GDF said.

In response to a social media post that Afro-Guyanese were being sidelined for Colonel Khan, an Indo-Guyanese, to be at the helm of the GDF, the defence force said, “the Force again warns against such reckless publications that attempt to sow discord in our society.”

2022-06-21
Denis Chabrol
Previous: Norton rubbishes Jagdeo’s dismissal of gas subsidy
Next: Organisation for the Victory of the People says insufficient evidence to support Sale of Guyana to China