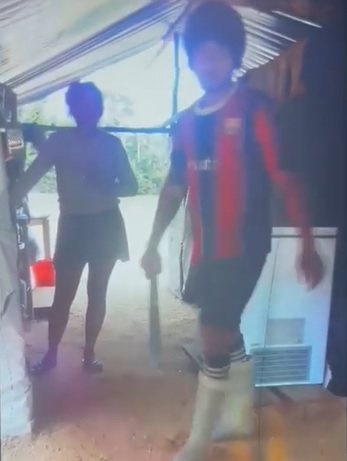 A man, with a cutlass, walking away from a woman he had just threatened.

A man, who was angered that his girlfriend refused to have sexual intercourse with him, severely burnt a gold miner from whom she sought help, the Guyana Police Force said.

Police also said the assailant also burnt the peacemaker’s girlfriend during the fracas at about 3 PM, June 5 at Panty Creek, Puruni Backdam.
According to police, the attempted murder stemmed from a disagreement between the assailant and a 32-year old Venezuelan woman with whom he has a relationship.
“The suspect and his girlfriend had an argument during which he demanded sexual intercourse from her. She refused and went into the victim’s camp seeking help. The suspect became annoyed and threatened to kill her.
The victim asked him to desist and in so doing the suspect left and returned shortly afterwards with a bucket with gasoline and threw it on him and set him alight,” police said.
Police are treating the incident as an attempt to murder 22-year old Sheldon Harry of  650 Greenwich Park, West Coast Demerara,. Mr. Harry’s girlfriend, Grace Mato, who went to his assistance, was burnt because the flames spread to her.
Investigators said they were searching for a resident of Kitty, Georgetown who has been identified as the perpetrator.
The conditions of Harry and Mato are listed as “serious” as they have been admitted to the Georgetown Public Hospital’s Burn Care Unit. Eighty-one percent of his body is burnt and 21 percent of her body is burnt.