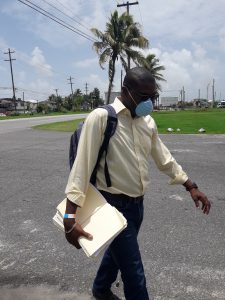 APNU+AFC election official David Patterson on May 5, 2020 outside the Arthur Chung Conference Centre, where votes were being recounted, with files of related documents.

Co-founder of the Alliance For Change (AFC), Raphael Trotman will for the first time not be contesting any position at the upcoming National Conference, but incumbent General Secretary David Patterson is vying for only one position – Leader.|

When the National Conference is held on June 11, Mr. Paterson will be coming up against co-founder Khemraj Ramjattan for the position of leader.

Mr. Ramjattan and Mr. Patterson have each received eight nominations for the post of Leader.

Mr. Ramjattan is also contesting for the posts Chairman and General Secretary along with Catherine Hughes, Sherod Duncan, Juretha Fernandes and Ricky Ramsaroop.

Mmes Hughes and Fernandes, and Messrs Duncan and and Ramsaroop are also nominated for the positions of Vice Chairman and General Secretary.

The AFC also said in its statement that Devin Sears and Valerie Garrido-Lowe are also running for the post of Vice Chairman, while Neilson Mc Kenzie and Michael Carrington are seeking to become the next General Secretary.

Mr. Trotman has been ill for several months now with a throat problem.

The AFC said 285 delegates representing the ten regions in Guyana, the USA, Canada, the UK, the Caribbean, the Women for Change (WFC) and the Youth For Change (YFC) will be attending along with 50 observers.