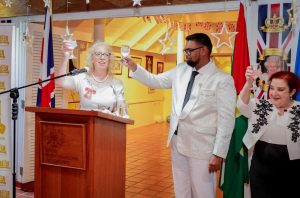 Putting the figures into perspective, back in 2011 trade between the two countries totalled 94 million pounds sterling (approximately US$118,126,858). “The trade has expanded six times in the last 10 years,” she added.

High Commissioner Miller said plans were being explored to establish a British Chamber of Commerce in Guyana.

President Irfaan Ali, who also addressed Thursday night’s event, met top business executives and British politicians in London earlier this year, a move that High Commissioner Miller says has set the tone for improved trade relations between Guyana and Britain. “As a result of this visit, particularly His Excellency meeting with Prime Minister Boris Johnson, we are now in the process of developing a more formal framework that will enable a deeper relationship including for future commercial engagements,” he said.

President Irfaan Ali said major financial institutions in Britain have a huge chunk of money to invest in Guyana. “I was at a very important meeting with huge financial institutions in the UK and what I heard in that meeting was mind-blowing; that is assessing the risk of Guyana, assessing all that has to be done. There is an envelope of resources through the UK that is there for government and the private sector that is in the hundreds of millions of pounds,” he said.

The President also said that Guyana and the UK were working to remove trade barriers to allow smooth access of Guyanese products to that European market.

The British High Commissioner credits the improved trading relationship to the hard work of the UK’s Department for International Trade.

Earlier this year, a British trade mission visited Guyana and a memorandum of understanding was signed between the Georgetown Chamber of Commerce and Industry and the long-established business organization named the Caribbean Council.