Norton refuses to meet Ali on Service Commissions; Govt will consider “what is good” for Guyana in appointing Chancellor, Chief Justice 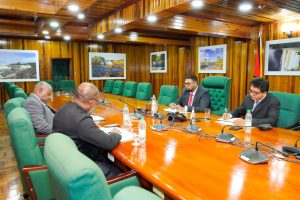 Opposition Leader Aubrey Norton on Monday refused to hold a second round of in-person consultations with President Irfaan Ali, saying he was busy and he has not received the basis for appointments to several commissions.

“In any event, if my schedule did permit me to attend, I draw to your attention that I am not yet in receipt of the grounds upon which each specific recommendation for appointment is being made. This is necessary if there is to be meaningful consultation in keeping with the Constitution,” Mr Norton told Minister of Governance Gail Teixeira in his letter dated March 30, 2022.

President Ali said in remarks on Facebook that Mr Norton did not turn up for the meeting and no correspondence was received from him. But as he was on Facebook, Mr. Norton’s letter dated May 30, 2022 was being circulated to the media.  The President, for his part, said that on May 16, 2022, the curriculum vitae of 14 persons including the nominee for the Judicial Service Commission, the four nominees for the Police Service Commission, which were approved unanimously in a Committee of Appointments and by the National Assembly were dispatched to Mr. Norton.

The Guyanese leader, in referring to the Opposition Leader’s request for grounds upon which each specific recommendation for
appointment is being made, said the additional information has already been provided. “They requested the names of the commission that I propose to appoint as was his first request. We provided that we provided the names; we provided the Constitutional Commission that we were proposing to appoint. He then responded after we fulfil his request to say that he still wants more. Notwithstanding that this too was responded to on May 12th 2022, which was delivered and received at Congress Place,” Dr Ali said.

But, already Vice President Bharrat Jagdeo said a number of factors have to be considered in confirming the appointment of those two top officials of the judiciary. “The President has to examine track record and everything else before he makes up his mind as to who he wants to recommend…I don’t think it’s an automatic process so, therefore, if it’s automatic then you won’t have had need for this clause so whenever the President is ready, he will inform the Opposition Leader and then the Opposition Leader will have a chance to express a view  as to whether he agrees or not. If he does not agree, then you cannot have the confirmation,” he said. Mr. Jagdeo, a former President, recalled that the then opposition had refused to support his nominees for Chancellor and Chief Justice.

Mr. Jagdeo added that, “the PPP (People’s Progressive Party) government will not make decisions based on the caprices associated with moods. They will make decision and the President will make a decision on the basis of studying the facts and the ability of people and what is good for the country.”

The Attorney General Anil Nandlall and Minister of Local Government Nigel Dharamlall have expressed concern about decisions by  Justice Dawn Gregory and Chancellor of the Judiciary, Yonette Cummings that the Guyana Court of Appeal has a right to hear an appeal of the High Court’s decision to throw out an election petition. The Guyana Court of Appeal decision has since been appealed to the  Caribbean Court of Justice (CCJ).