Dozens of scissors seized but no marijuana mentioned 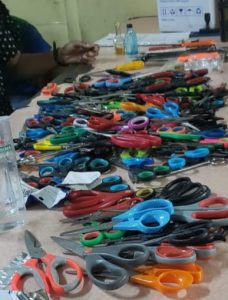 Numerous pairs of scissors that were seized from patrons at the Jouvert held Saturday night at the National Park.

A day after the Guyana Police Force was criticised for robberies and discharge of several rounds in the air during  Friday night’s concert by Jamaican artiste, Skeng, at the National Park, police  Saturday night seized dozens of scissors from patrons at the Jouvert at the same venue.

However, no mention was made  about whether marijuana was found in the possession of any of them. Usually, smokers carry scissors with them to chip the marijuana before rolling a joint.

Police also did not say whether those found in possession of the offensive weapons were arrested.

The Police Force said one .32 pistol and one .32 bullet, which a man dropped outside the Park at about 2:30 Sunday morning during  a fight with another, was seized by a lawman. The 26-year old man later identified himself, said he is a porter and lives in Festival City, North Ruimveldt, Georgetown.

Prohibition of glass bottles and the the use of metal detectors and scanners were among the outcomes of a high-level meeting among the Police Commissioner Mr Clifton Hicken, other high-ranking officials and the Hits and Jams promoter, Rawle Ferguson. “The security posture (and lack thereof) at the event was discussed and recommendations were made for strict compliance prior to the hosting of any other such events in the future,” the Police Force has said.

Police said these knives and other improvised weapons were also seized by police from persons before they entered the National Park .

Demerara Waves Online News understands that uniformed police were out in their numbers on Saturday night and early Sunday morning.

The Police Force has appealed to patrons, who were in the National Park on Friday night into Saturday morning to provide video recordings of the shooting during the Skeng concert. “The Guyana Police Force is also appealing to the general public or anyone who might have knowledge or information (maybe phone videos) to share with the police as this will assist investigators in identifying the perpetrator(s) who fired shots at the event that caused chaos and panic,” police said.

2022-05-29
Denis Chabrol
Previous: Govt’s part-time employees encouraged to seize opportunity to study
Next: Engineer stabbed to death after intervening in a wounding incident