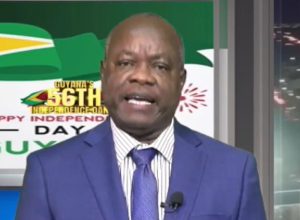 In a message to mark the end of British colonial rule on May 26, 1966, he said Guyanese need to do better to entrench their shared values, strengthen their sense of “One Destiny” and rejuvenate their national pride. “We need to end the existence of Two Guyanas,” he said.

“We must move beyond lip service and give substance to building racial harmony in Guyana. We can and must take tangible steps to eliminate racial discrimination, to guarantee equality of opportunity for all, and to establish healthy inter-ethnic understandings and interactions,” he said.
No details were provided by the Opposition Leader but he emphasised the impo0rtance of a level playing field. “No ethnicity, no group, no class, no citizen is superior to any other. All must be treated equally and respected. And all must share fairly and equitably in the national patrimony,” he said.
While the National Assembly recently moved a step closer to the re-composition of the constitutional Ethnic Relations Commission, President Irfaan Ali is yet to establish his long-promised “One Guyana Commission” to be chaired by Prime Minister Mark Philips to conduct countrywide hearings on ethnic relations.
Since the split in the People’s Progressive Party (PPP) in the 1950s, Guyana’s political landscape continues to be deeply fragmented along racial lines between the Indo-Guyanese backed PPP and the Afro-Guyanese-dominated People’s National Congress Reform.
The Opposition Leader, who is also the PNCR Leader, chided government for “bad-governance and devoid of national self-confidence and optimism.” “Instead of concerted effort and broad-based participation in national decision-making, we find a government increasingly hell-bent on instituting political dominance and autocratic rule,” he said.
A United States-funded assessment has recommended power-sharing but the governing People’s Progressive Party has since poured c0ld water on the study and has promised to send a response to the United States Agency for International Development.  The Irfaan Ali-led government has refused to engage in political talks with the opposition A Partnership for National Unity+Alliance For Change (APNU+AFC) unless it recognises that it has been legitimately elected at the March 2020 general and regional elections. The opposition has alleged that the elections were rigged by the PPP while the government and the international community has pointed to skullduggery to declare the coalition the winner in Region Four and by extension nationally.

Mr. Norton lamented that there was economic discrimination in favour of a select clique rather than the broad masses of Guyanese. “Instead of a viable economy, we find an economy that privileges the political elite, friends and family, but shortchanges the elderly, single parents, unemployed, the working poor, the young and upcoming, small business owners, small farmers and families with babies and small children,” he said. Sections of the big private sector are perceived in some quarters as enjoying a close relationship with the PPP in and out of government.

The Opposition Leader recommended that steps be taken to forge a harmonious community based on democratic values, social justice, fundamental human rights, rule of law, transparency, accountability, good governance, rule of law and effective management of Guyana’s resources.
Declassified documents by the United States and Britain have showed the roles they had played to engineer the removal of PPP Founder Leader Cheddi Jagan from office and the granting of independence under Burnham for fear that the former would have created another Soviet communist satellite state second only to Cuba.