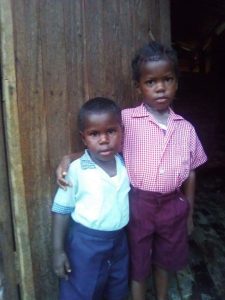 These boys died at 6 and 8 years old.

Other sources identify them as Timothy Kippins 8, Trayshaw Flur, 6, and 1-year old Zhlia Flur. The sources said they were working on the theory that the fire was deliberately set by their mother’s partner while she was at work. She is a security guard.

Investigators have so far been informed that there is a history of domestic problems between the woman and the man. They are trying to confirm whether the man called her on the phone and informed her that he burned the house with her children inside.

Mr. Wickham said investigators were still combing the scene of the blaze about which the Fire Service received a call 1:25 AM. The house was located at 10 Field, Barnwell North, Mocha-Arcadia, East Bank Demerara.

Asked whether efforts were made by neighbours to rescue the children, he said the one flat wooden building was located at the back of the village and some distance away from other residents.

It is too early to say whether the children were left alone in the house or their parents were there and escaped without being able to rescue them. “As of now, we are only able to give account that the children died so they (investigators) are going to get the parents and get other information,” he told Demerara Waves Online News.

The Fire Chief said the building was not grilled and the house was located “way down into the back of the village so the closest neighbour was some distance and was not able to do any rescue.”