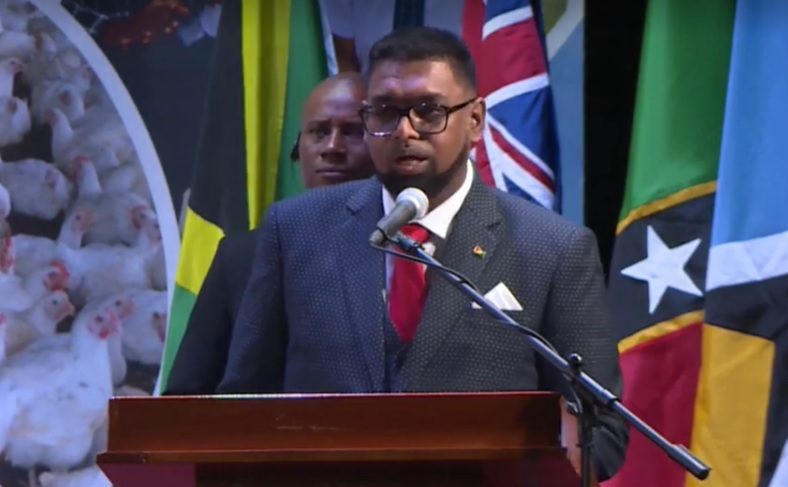 President Irfaan Ali on Thursday announced a series of targets that are aimed at reducing Guyana’s US$30 million annual food import bill in line with the Caribbean Community’s (CARICOM) target to reduce food imports by 25 percent by 2025.

Addressing the opening of the Caribbean Agriculture Investment Forum and Expo, the Guyanese leader who is responsible for agriculture in the regional quasi-cabinet he said government was working closely with the business community and young people to boost food production.

“To reduce our food import bill which We have entered into partnership and collaboration with our private sector building consortium with our farmers and young people in the production of high value crops, corn and soya, a special project with the young people to launch houses a project we launched today with young people for shrimp farming,” he said.

The President said government’s investment of GY$100 million in the production of brackish water shrimp has seen production grown from 250,000 kilogrammes one year ago to 1.2 million kilogrammes. “This tells a story that we have the ability and we have the know-how to do this once we embrace this path,” he added. Government plans to invest another GY$150 million to boost production by more than 50 percent.

Also noted was the allocation of GY$200 million for the development of a growth farm for Pacific white leg shrimp and GY$40 million to facilitate research and develop  breed programs for indigenous commercially viable freshwater species to conduct.

Turning his attention to wheat production to satisfy local and eventually regional needs, the President said “so far, this we are seeing tremendous success in the trials.”

Guyana also intends to boost its  sheep production with 1,000 Black Belly sheep from Barbados for the production of mutton for that Caribbean island. He said Guyana would be providing 50 shade houses to Barbados.

Dr Ali said Guyana would be investing in marine cage technology in the riverain areas starting with cages for tilapia and tamakey.