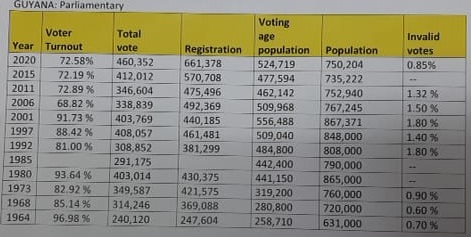 Figures released by the Guyana government and attributed to the US-based International Institute for Democracy and Electoral Assistance.

The names of more than  30,000 first-time registrants are set to be added to the National Register of Registrants from which the voters list is created for local and general elections, Commissioner of Registration and Chief Election Officer Vishnu Persaud said Friday.

Mr. Persaud said  since the registration exercise began on March 7, 2022 the number of persons turning up daily across Guyana to register has reduced but that number is expected to see a sharp rise closer to the deadline of May 29.  “It is expected that there would be a surge to the end of the exercise which we are prepared for,” he said.

The Chief Election Officer said after the registration process has ended, the fingerprints would be sent overseas to be cross-matched to ascertain whether there are matches . He said if there are any, an investigation would be conducted and the “doubles” removed before the list of new registrants is taken to the seven-member Guyana Election Commission (GECOM) for approval to be added to the National Database of Register of Registrants.

After that is done, he said National Identification Cards would be issued.

The High Court has ruled that it would be unconstitutional for the names of persons, whether here or overseas, are removed from the database unless they are deceased.

The opposition A Partnership for National Unity+Alliance For Change has claimed that there is substitute voting in the names of deceased, migrants or absent persons. But governing People’s Progressive Party Civic Elections Commissioner Bibi Shadick has said that no evidence has ever been provided to prove that allegation.