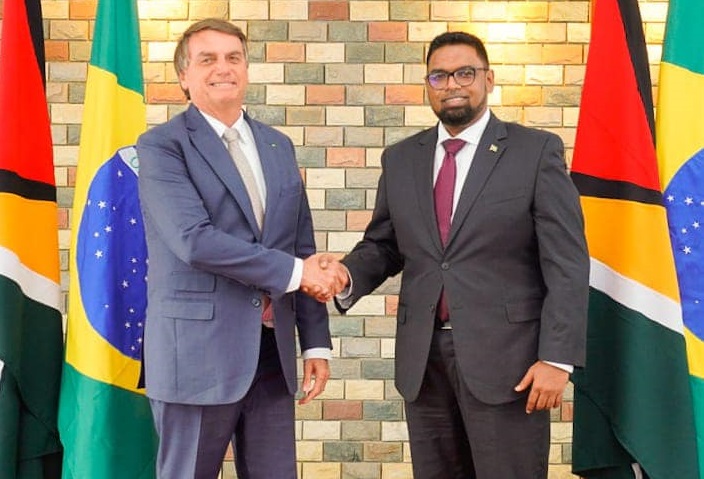 The President of Brazil Jair Bolsonaro and his Guyanese counterpart, Irfaan Ali’s reaffirmation of their commitment to settling border controversies peacefully is a strong signal to Venezuela that it must respect any ruling by the World Court, International Relations Professor Mark Kirton said.

At the end of Mr Bolsonaro’s one-day visit to Guyana on May 6, 2022, he and Dr. Ali stated that, “the two Presidents agreed on the importance of the observance of the principles of peaceful settlement and of territorial integrity, in the framework of international law, in the resolution of any disputes in the region.”

Professor Kirton said Brazil’s position that its border with Guyana is inviolable is nothing new, but it was important to ensure that that Brazil remains as “the counterweight to any potential Venezuelan aggression.”

“Additionally, Brazil , as part of Guyana’s strategic engagement, must be influenced to lead the region to ensure Venezuelan compliance with the ruling of the International Court of Justice, when it takes place . In that context ,Guyana has to ensure that the court of regional and international public opinion is on our side and Brazil can be a leading actor in this situation,” he told Demerara Waves Online News/ News-Talk Radio Guyana 103.1 FM.

Professor Kirton, however, cautioned that with Brazilians scheduled to vote in elections on October 2, 2022, Guyana has to be wary that former Brazilian leader Luis Inacio Lula Da’ Silva is leading in opinion polls. He said the implication here is that a segment of the Brazilian population seeing Bolsonaro as a ‘close friend’ might not be well received by a segment of the Brazilian political landscape and could cause a reduction in the robust support provided by Brazil on the border issue. ” If there is a change of government , as the resurgence of the ‘ pink tide ‘ in Latin America suggests, and (Venezuela’s President Nicolas) Maduro becomes a Brazilian ally , then there can be less pressure placed on Venezuela for compliance with international law.

According to Mr. Kirton, the Brazilian President’s visit was being regarded in some quarters as badly timed because of his positions on the environment , climate change , the protection of the Amazon , and the COVID pandemic thar are in direct contrast to most of the region’s views.  “While as the saying goes countries can choose their friends but not their neighbors, and Guyana has to continue to collaborate meaningfully with Brazil , there must be strategic geopolitical thinking by Guyana in order to ensure that the country benefits from the engagement,” he said.

Guyana has asked the International Court of Justice (ICJ) to find that the 1899 Arbitral Tribunal Award of the land boundary with Venezuela is a full and final settlement.

Venezuela maintains that the Essequibo Region, including the oil-rich Atlantic Sea offshore that area, is hers. That Spanish-speaking Western neighbour has over the years displayed military aggression to seismic vessels that have been collecting data from offshore concessions that have been awarded by Guyana. Since the discovery of oil in the Stabroek Block, Venezuela has seized Guyanese fishing vessels and has unilaterally extended its maritime boundary to include the sea offshore Essequibo as well as Demerara, Berbice and a number of Caribbean islands.