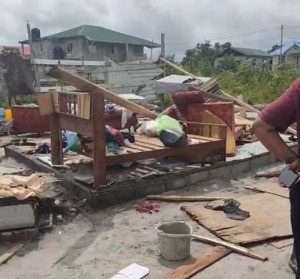 Several houses and foundations at Amelia’s Ward, Linden were demolished and destroyed on Saturday because they are in the path of a proposed road for the expansion of housing in the town, but the opposition A Partnership for National Unity+Alliance For Change (APNU+AFC) has formally requested compensation and alternative land for the dislocated residents.

Housing Minister Colin Croal said notice was given to the residents but, for example, one of them continued to construct a house. He stressed that only those structures on the proposed road have been removed. “The part where the road has to be go is where you have clearing….Where you had that clearing, where you had that demolition is just purely on the alignment of the road. They didn’t trouble anything else. It is not intended for the entire area” he told Demerara Waves Online News.

Mr. Croal said the road must be constructed as part of the infrastructure works, but Mr. Figueira  said the road could have been built on the other side of the area.

Government had said it would be spending GY$300 million to build 40 houses in Amelia’s Ward.

While the Housing Minister said two notices had been issued so far to the residents, APNU+AFC parliamentarian Jermaine Figueira said the houses were crushed prematurely well ahead of the dead the 12th May, 2022 deadline. In a notice, dated 5th May, 2022, seen by Demerara Waves Online News, one of the residents was ordered to “cease and desist from all unauthorised developmental works and remove and remove all encumbrances including wooden structures on or before 12th May, 2022.

Mr. Croal said the squatting on the area that had been identified for housing development  had been “encouraged”. 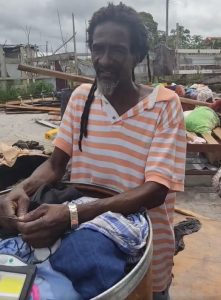 Region 10 Chairman, Deron Adams has since written to the Housing Minister requesting that he or his representative attends a meeting with the affected residents on May 8, 2022 to discuss their plight and allocate them a house lot number for a plot of land in the new scheme.

Asked whether those affected residents would be provided with an alternative land, Mr Croal said “when they are ready they can engage the Central Housing and Planning Authority to be dealt with.”

Mr Adams is also demanding that the residents be compensated for the destruction of their properties. “The Regional Democratic Council of Region 10 condemns in the strongest way this vile act and calls on your Ministry/ Ministries to outline immediately what compensation and relocation arrangements are available to the residents who are affected by this new development work and whose structures have been damaged by your operatives so far,” he said.

Lamenting the “terrible state” of the demolition, he noted that the crew even pushed down a house with an elderly and sick w0man who was instead. “These people came here when there were only trees and chopped out these areas and looking to eke out a living so I’m telling you is a lot of poor people but they are industrious but they would have pooled their resources and started,” he said. Another woman, whose house was being rebuilt on Sunday, is a victim of domestic violence, he added.

The APNU+AFC lawmaker said the residents had paid a surveyor and had earmarked locations for roads.

He accused government of discriminating in the way it was regularising squatters in Region Two, a governing People’s Progressive Party Civic (PPPC) stronghold, in contrast to the APNU+AFC stronghold of Region 10.