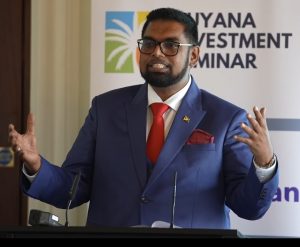 President Irfaan Ali on Tuesday sought to woo British investors to take advantage of a  wide range of opportunities in this South American nation, saying that already there appeared to be better financing terms other than those being offered by China.

In an address to members of the United Kingdom business community, politicians and diplomats, he said the UK has set aside about $750 million pounds sterling that Guyana can qualify for through investment and infrastructure in Guyana but the uptake has been slow. “What is missing is the aggressiveness from the private sector here in the UK and the EU generally,” he said.

Referring to the presence of Chinese companies in Guyana, the Guyanese leader said investors from that Asian nation “find the market faster than anyone else” because they have a different approach to doing business. “Well, I can tell you from my humble experience- their aggression is far different and frankly speaking now that we are being sought after by different stakeholders our experience is changing,” he said. He explained that Guyana recently finalised financing for a new children and maternal hospital with financing coming from the EU “at better terms than the Chinese.”

In a separate engagement on Guyana’s tourism, Dr. Ali said the EU and UK’s relationships with Guyana are “very different now”.  The maternal and children hospital, he said, was being funded by Austria for 150 million Euros. He said the UK’s EximBank would be “investing heavily in Guyana.”

The President said the United States has also committed to providing attractive financing. “We had a meeting with the US and they said to us whatever financing you are getting, we are committing to you that we’ll beat the financing- the terms but an interesting question is would these financing or these terms, would it have been available without oil and gas ,” he said.

Chinese companies have been identified through the National Procurement and Tender Administration Board to build a new Demerara River bridge and the Amaila Falls Hydropower Station.

He stressed that Guyana’s development platform was hinged ion improving its human capital through education and health as foreign exchange earners, tourism, boosting corn and soya production to become self-sufficient in poultry and livestock feed, constructing new homes and training 6,000 Guyanese for the hospitality sector, He added that a deal is being negotiated with Brazil to improve Guyana’s mutton production and mutton products to as much as US$55 million. “These are the opportunities that we are preparing the economy and we are investing in the economy to be the future revenue earners and when one asks what the resources  from oil and gas will do for us, these are some of the things that it will do for us,” he sad