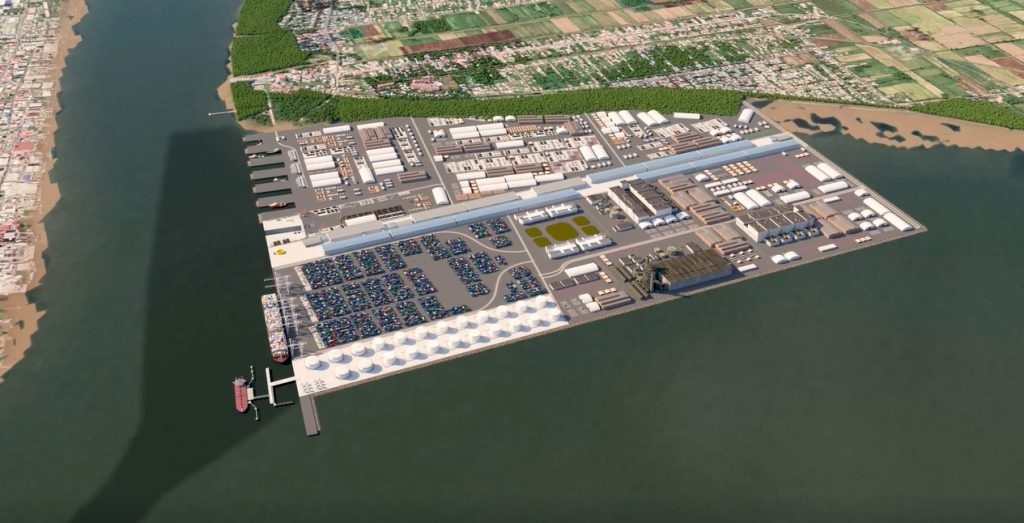 A project impression of the Vreed-en-Hoop Shorebase Inc.

A US$300 million shorebase would be constructed at Vreed-en-Hoop, West Bank Demerara by a wholly-owned Guyanese company, and ExxonMobil on Friday inked a deal to lease the facility when it is finished in the fourth quarter of 2023.

Speaking at the signing of the agreement between Vreed-en-Hoop Shorebase Inc (VEHSI) and ExxonMobil Guyana,  Director of NRG Holdings Inc; Nicholas Deygoo-Boyer refuted claims in sections of the media that government had a stake in the shorebase. “Vreed-en-Hoop Shorebase Inc./NRG Holdings and the Port of Vreed-en-Hoop masterplan development is entirely a private development,” he said. He added that the only support that government has provided has been the lease of the land and granting the permit. “There is no financial support being given; that I want to clear the air on right away. This is entirely a private initiative and that means that the risk capital is being borne by the developers, the entrepreneurs, our partners,” Mr. Deygoo-Boyer said. NRG Holdings is made up of family-owned businesses of Eddie Boyer, Alfro Alphonso and Nazar ‘Shell’ Mohammed.

Mr. Deygoo-Boyer said the contracting company, Jan de Nul, has a 15 percent stake in the shorebase. “They have done this across the world. That’s why we are working with them,” he said.

Mr. Deygoo-Boyer said the site was chosen based on solid geotechnical data, including flow-data, that fed into ExxonMobil’s extensive competitive bidding process. “This project, the motivation behind it, believe me, after we saw the numbers, profit is somewhere long coming. Definitively this is nit a get-rich-quick scheme but what it does for the development of this country is incredible,” he added. 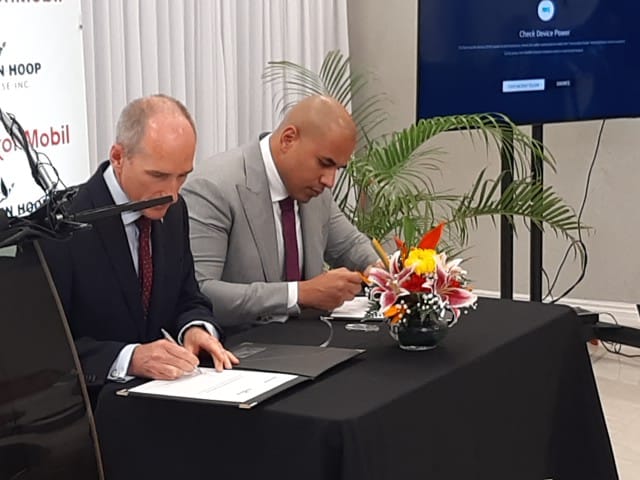 He touted the Port of Vreed-en-Hoop project as one that would increase local content, reduce commercial shipping cost, provide land for those who need service companies and would not impact on existing operations and neighbourhoods. The NRG/VEHSI official said a complete Environmental and Social Impact Assessment.

The NRG/VEHSI official said the facility would have a berth, heavy-lift paths and fabrication paths and “what that means is more in-country work for Guyanese.”

President of ExxonMobil Guyana, Alistair Routledge said that unlike the Guyana Shorebase Inc at Houston, East Bank Demerara that had seen a shift of the supply chain for drilling and production operations almost completely out of Trinidad,  the VEHSI would facilitate production activities such as the preparation for installation of subsea equipment such as well. “We have started doing some of that fabrication here in country as some will be familiar with the SAIPEM yard on the East Bank,” he said. He said VEHSI would be 10 times the SAIPEM area and would include two heavy load berthing points, more capacity to do more construction and assembly work in-country.

Mr Routledge remarked that with the shorebase at Vreed-en-Hoop and the planned gas-to-shore energy project, the expansion is shifting beyond Region Four to Region Three. “This is going to be, along with the gas-to-energy project that is coming, a huge opportunity for Region Three,” he added.

Minister of Natural Resources, Vickram Bharrat added that the new facility is in keeping with government’s plan to “spread development throughout the country.” apart from Region Three which he regarded as “one of the fastest growing regions” in Guyana.  He said the partners, including government, have achieved local content, fairness and transparency through the process.

2022-04-22
Denis Chabrol
Previous: No termination of Linden Hospital workers; contracts to be renewed
Next: Guyanese murder suspect held for sexual offence with girl in Suriname