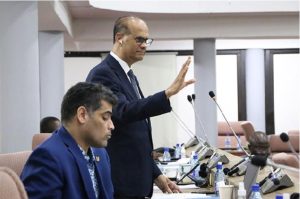 NDP faction leader Rabin Parmessar wants clarity from the government about commitments made to Guyana. He wants to know the status of the 150 fishing licenses. (Photo: DNA)

Suriname’s opposition National Democratic Party (NDP) is calling on the government there to disclose all agreements with Guyana to the Parliament.

Starnieuws reports that NDP faction leader, Rabin Parmessar issued the call amid the Guyana government’s persistent concerns about promises that have been made by Suriname’s President Chandrikapersad Santokhi.

The Surinamese leader had promised that 150 Surinamese fishing licences would have been issued to Guyanese.

Mr. Parmessar  has been questioning why Suriname’s Foreign Affairs Minister  Albert Ramdin did not summon the Guyanese ambassador and file a protest note on the matter.

The NDP faction leader says Suriname is getting a bad name internationally because of statements  by the Guyanese government that there is hard evidence that the Surinamese leader had promised the fishing licences to Guyanese.

Since last year, Mr. Parmessar has been asking the government about fishing licences, but has not received a conclusive answer.