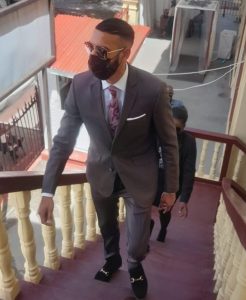 A policewoman has filed a private criminal charge under Guyana’s Racial Hostility Law.

Woman Constable Shawnette Bollers, who is an Afro-Guyanese, filed the charge against Indo-Guyanese lawyer, Nirvan Singh.

Chief Magistrate Ann Mc Lennan granted the lawyer $100,000 bail and ordered that he return to court next month.

Particulars of the charge state that on March 20, he excited or attempted to excite racial hostility or ill-will against Ms Bollers.

At the time, she had been on duty at the residence of former Chancellor of the Judiciary, Carl Singh on Middle and Cummings Streets, Georgetown.

Constable Bollers has accused Attorney-at-Law Singh of using words to her in a public place such as “black monkey” , “monkey” and “Black people have no purpose in life.”

Mr. Singh has already publicly denied hurling racial slurs against Constable Bollers. ““I, therefore, wish to say that the racist conduct, of which I am accused, in no way reflects my philosophy or personal values,” he said in a statement on April 8, 2022.