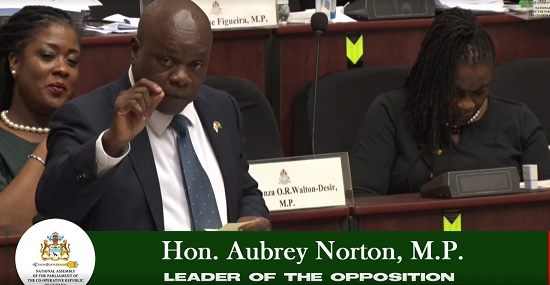 Opposition Leader Aubrey Norton was Wednesday touted as the main opposition’s presidential candidate for the next regional and general elections constitutionally due by 2025.

After Mr. Norton was sworn in as a parliamentarian, opposition A Partnership for National Unity+Alliance For Change (APNU+AFC) parliamentarian Jermaine Figueira welcomed him as, among other things, the next President of Guyana.

“Mr. Speaker, I join my colleagues also in welcoming a friend, a comrade and the leader of our great party and soon to be Opposition Leader and moreover the President-in-Waiting Mr. Aubrey Norton to the House,” said Mr. Figueira  who is also a Central Executive member of their Pe0ple’s National Congress Reform (PNC), the largest part in the opposition coalition.

For his part, Mr. Norton had hinted on one of his appearances on Politics 101 that he had his eyes set on the presidency.

Back in 2015 and 2020, the Chairman of the PNCR-led APNU had been the presidential candidate.

The PNCR is due to hold another biennial delegates congress to elect a leader and 15-member Central Executive in 2023.

Mr. Norton has promised that under his leadership, he would revitalise the PNCR and hold the governing People’s Progressive Party Civic accountable.