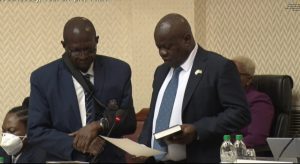 Mr. Aubrey Norton taking the Oath of Office as a new member.

Leader of the People’s National Congress Reform (PNCR and Chairman of A Partnership for National Unity (APNU), Aubrey Norton was Wednesday sworn in as a member of the National Assembly.

Mr. Norton has not yet been sworn in as Guyana’s Opposition Leader to replace Mr. Joseph Harmon who has since resigned from that position and parliamentarian altogether.

The APNU+Alliance For Change (APNU+AFC) parliamentarians would now have to meet to elect Mr. Norton as Opposition Leader. 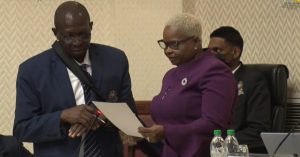 Ms. Volda Lawrence taking the oath office as a new member of the National Assembly.

He and Ms. Lawrence replaced Mr. Harmon and Dr Nicolette Henry who have since resigned from the National Assembly.

Mr. Norton had said that Ms. Lawrence would be responsible for finance in the reorganised opposition shadow cabinet.

The PNCR Leader/APNU Chairman’s return to the House as an Assemblyman had been delayed for several months, in an apparent infighting in his party.