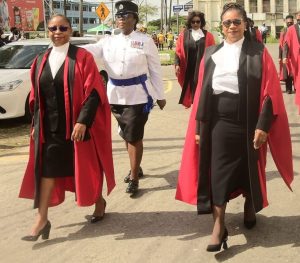 Attorney General Anil Nandlall is backing calls by the Guyana Bar Association (GBA) for a change in the constitutional method for the appointment of a substantive Chancellor and Chief Justice due to years of refusal by successive Opposition Leaders to approve the President’s choices.

Noting that the constitutional reform process has started, he stayed clear of suggesting what the new formula should be but stressed that every effort should be made to break the gridlock mechanism which constitutionally requires the approval of those permanent appointments by the Opposition Leader.

“I don’t think we need more lessons. We have 22 years of experience so when we start the constitution reform process, I hope that we would be guided  by these real examples and don’t make fanciful recommendations, idealistic and unreal recommendations,” he said in his Social Media interactive session.

The Attorney General observed that the framers of the amendment to the Constitution in 2001 had also included a provision for the President to appoint a Chancellor and a Chief Justice to act if the Opposition Leader refuses to approve the President’s nominees.

Mr. Nandlall noted that no other country in the Commonwealth has such a constitutional formula. He also said that further afield in Pakistan there is a formula similar to Guyana’s and that country has a similar experience. “The thing does not work. It makes no sense putting into a law and worse yet putting into a constitution a mechanism that is going to cause deadlock,” he said.

The GBA on Tuesday urged that steps be taken t0 change the formula because the failure to appoint a permanent Chancellor of the Judiciary and Chief Justice has lowered Guyana’s standing on the international rule of law index. The World Justice Project states that Guyana is ranked 78 out of 138 countries on the global rule of law index and 17 out of 32 in Latin America and the Caribbean.

2022-04-06
Denis Chabrol
Previous: OPINION: Consultation not an abstraction, Mr. AG; not a favor to the people, sir (due consideration for law)
Next: Aubrey Norton, Volda Lawrence now parliamentarians