Article 13 not enforceable; govt doesn’t have to consult with anyone- Nandlall 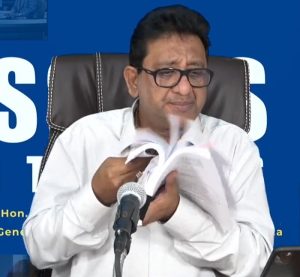 Attorney General Anil Nandlall on Tuesday said Article 13 of Guyana’s constitution, whose objective is for Guyanese to participate in making decisions that directly affect their well-being , cannot be enforced and there is no law compelling the government to consult anyone.

“In my view, and perhaps now we will have it determined, in my view Article 13 is not an enforceable right. It is declaratory of an aspiration,” he said on his weekly Social Media programme.

Article 13 states: “The principal objective of the political system of the State is to establish an inclusionary democracy by providing increasing opportunities for the participation of citizens, and their organisations in the management and decision-making processes of the State, with particular emphasis on those areas of decision-making that directly affect their well-being.”

Opposition Chief Whip, Christopher Jones and trade unionist Norris Witter have cited Article 13 in challenging the passage of the Natural Resource Fund legislation on December 29, 2021 on several grounds including the failure to consult before the Bill had been tabled in the National Assembly. A number of civil society organisations and the opposition had failed in their efforts to convince government to stall the tabling and passage of the wealth fund legislation to allow for proper consultation.

The Attorney General, however, said there was nothing that compelled the government to consult with anyone more so since it enjoyed a simple majority in the National Assembly to pass legislation. “Consultation is an important component of good governance. It’s a prerequisite in a democracy. There are good values but you are dealing here with law. There is no legal obligation on a government to consult,” said Mr. Nandlall.  He questioned the now opposition A Partnership for National Unity+Alliance For Change failure to consult with the People’s Progressive Party before the passage of the Natural Resource Fund Bill in 2019.

On the other hand, Mr. Nandlall said the PPP administration had consulted, but “perhaps we did not consult that group” before introducing the new Fund legislation to the House. “I don’t know that any government has to consult any group or all the groups,” he added.

APNU+AFC hopes to convince the High Court to scrap the Natural Resource Fund Act on the grounds that the Speaker’s Mace was not before the Speaker at the time and that the opposition and civil society had not been consulted before.